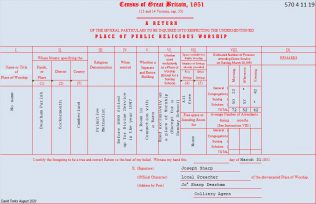 zoom
Dearham ; Return from the Primitive Methodist chapel in the 1851 Census of Places of Public Religious Worship
transcribed by David Tonks

In the 1856 Primitive Methodist magazine W Fulton gives an account of the opening of Dearham Primitive Methodist chapel in the Whitehaven circuit. The society had previously met in a preaching place – a room “in connection with a barn” which was used exclusively as a place of worship, except for a Sunday school.

Eighteen years after the village was first missioned, a plot was obtained from S. Walker, (the owner of much property at Dearham), on a nine hundred and ninety-nine year lease at an annual rent of 9s. 6d. The Earl of Lonsdale allowed them to obtain stones out of his quarry for nothing.

“The chapel is 12 yards by 9. From the floor to the ceiling it is 15 feet. The roof is covered with blue slate. The building is partly surrounded with a newly-erected wall for the protection of the property. The rising gallery will seat above 100 people. There are free sittings to accommodate 150 more, but the chapel will on extra occasions contain 300.”

The opening took place from October 19th, 1856. Preachers included Rev. J. P. Collins, Mr. Fowler, one of the trustees from Whitehaven,  Revs. D. Kirkbride, Baptist Minister, from Maryport, A. Douglas, Presbyterian Minister, from Workington; J. Locke, Wesleyan Minister, from Cockermouth, J. Waite and W. Fulton. The overall cost was £200 of which they had collected over half.

In 1859 we are told by J Fowler that the chapel had held re-opening celebrations, including a tea meeting for 200 – although he makes no mention of what was done to the building. The Preacher was Rev J Eckersley and speakers at the tea meeting were J Fowler (Whitehaven), Revs Eckersley, Dodds and Taylor, and Mr John Brown of Prospect. “It was good to be there”

On the 1960 Ordnance Survey map both Wesleyan and Primitive Methodist chapels are marked as Methodist churches in the village. In 1967 only the former Wesleyan chapel remains. It is still active in 2017. It is not clear whether the former Primitive building still exists.