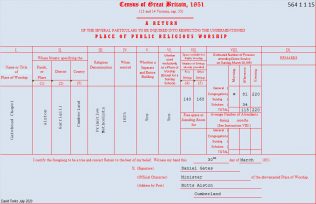 zoom
Gatehead: Return from the Primitive Methodist chapel in the 1851 Census of Places of Public Religious Worship
transcribed by David Tonks

The Primitive Methodist magazine of April 1857 contains an account by J Day of the opening of Garrigill Primitive Methodist chapel in the Alston circuit.  Garrigill was a lead mining village with a population of just over 1,000 people.  The first chapel measuring 24′ x 30′ was opened in 1825 when the society measured only seventeen members.

The 1851 Census by contrast records attendances of 81 in the afternoon (with 34 scholars) and 220 in the evening. Although the chapel records the chapel as Gatehead, it was in Garigill and the erection date is the same as the magazine article.

Growing numbers resulting in the chapel being widened by 6′, but that was not enough and in June 1856 building of a new chapel was started. It was easier because the chapel was free of debt.

The overall cost was around £330. Donors included The London Lead Company (by RW Bainbridge), the Commissioners of the Greenwich Hospital (by John Grey) and the Duke of Cleveland;l the remaining debt was around £170, borrowed at 4.5%.

The chapel is marked on the 1:2,500 Ordnance Survey map of 1859 and on the 1981 map in the same location it is labelled as the Methodist chapel. However, this is a later building as it carries the date stone 1885. On Google Street View 2009 the building is still there but it appeared to close around 2006.  You can see a picture on Geograph here.