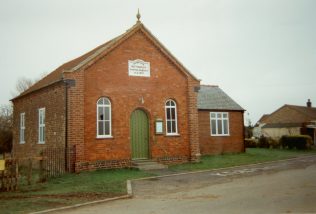 The new chapel measured 27′(l) x 18′(w).  Particular thanks were due to Mr. Thomas Daft who gave the land and to the farmers who gave most of the leading. The seats were all let.

Old Fen Lane Chapel was near the hamlet of Scrub Hill in the civil parish of Wildmore, at its western boundary with the parish of Coningsby. The Primitive Methodist chapel at Old Fen Lane dates from 1839. It was rebuilt in 1857.