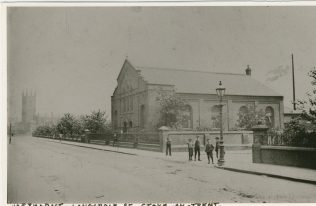 The Victoria County History of Staffordshire tells us that the first Primitive Methodist chapel in Stoke was built at Penkhull in 1815.

The second Primitive Methodist chapel in Stoke was built in John (now Leese) Street, off Liverpool Road, in 1834. In 1851 this chapel seated 40, but attendance on 30 March of that year was reported as being 43 in the afternoon and 151 in the evening.

By 1860 a new chapel had been built in Queen Street and this in turn was replaced by a chapel in Lonsdale Street in 1878. It was registered for marriages in 1890.

Lonsdale Street Chapel seated 350 in 1941  and had 80 members in 1957. It has since been demolished. Offices of Sanctuary Housing currently stand on the site.

In the 1856 Primitive Methodist magazine there is an article by N. W. Stafford of the opening of what it calls Stoke on Trent Primitive Methodist chapel, probably the chapel in Queen Street. Having outgrown their previous small chapel, in 1856, the Primitive Methodists purchased a larger chapel originally built for the Barkerites and more recently rented by the Independents. The opening services and tea meeting started on February 3rd 1856. Preachers included Rev. William Antliff, of Haslingden, J. Ridgway, Esq., of Shelton, W. E. Saunders, S. Sanders, ), Mr. William Lawton,  W. Bickerdyke, of Shrewsbury and J. H. Hill (Wesleyan minister).

The chapel cost £280, of which they had raised £117. They saved £20 by cleaning and painting the premises themselves, in preparation for the opening.