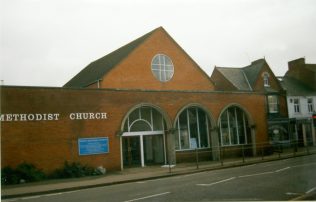 The Primitive Methodists in Leighton Buzzard originally had a wooden chapel in Mill Road which was destroyed in a fire in 1888. A replacement chapel was built in 1890 in North Street costing £2,340 and seating 500 people. A manse was built on the north side of the chapel. The laying of the memorial stones for the replacement chapel is recorded in the April 1890 Primitive Methodist magazine. The new premises included chapel, schoolroom and six classrooms and they hoped  would be half paid for by the time of completion.

When the 3 Methodist chapels in the town (Wesleyan on Hockliffe Street, Atterbury Mission on Vandyke Road and Primitive Methodist on North Street) combined in 1960 to form the Trinity church, the Primitive Methodist building was the basis of the redevelopment.  The manse was demolished as part of this work.