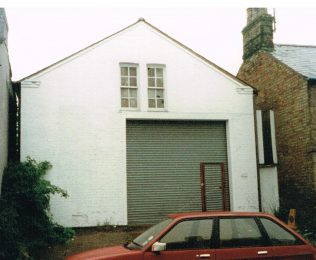 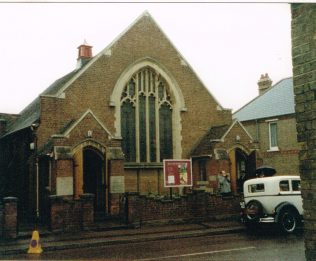 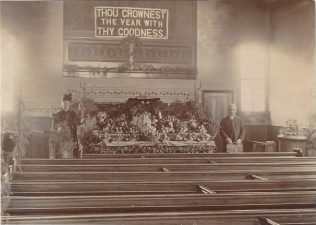 Initially the society rented a small cottage to preach in for several years, until 1854 when they hired a room over the infant school.

The first Eynesbury Primitive Methodist chapel in the front street was opened in 1855.  It measured 30 feet by 24, with a vestry 13 feet by 13. At the time of the photograph it was in use as a garage / store.

The second chapel was opened in 1928 and is still in use.  It accommodates 188 people.

In the Primitive Methodist magazine of 1855 there is an account by J. B. Horberry of the laying of the cornerstone for the chapel on Thursday, October 18th, 1855. The stone was laid by the Rev. J. Baker, Wesleyan minister of St. Neots and Rev. P. Turner, Independent minister of St. Neots, preached to “a considerable number of friends assembled on the occasion”

After the ceremony, “the congregation adjourned to the old preaching room, where they partook of an excellent tea. After tea a public meeting was held; Mr. Cooper presided, and interesting addresses were delivered by the Revs. P. Turner, J. Baker, G. Mitchell, of Bedford, and Mr. J. Tack, sen., and the writer. The collections were liberal, and the meeting was truly a good one ; the power of Elijah’s God was felt amongst us. Three backsliders returned to their Father’s house ; several sinners were deeply affected, and seemed to be not far from the kingdom of God.”

The opening services and tea meeting on and after December 26th, 1855 were described in the 1865 Primitive Methodist magazine by William Cooper. Addresses were given by Mr. G. Tetley, from Bedford, Mr. Cooper, J. B. Harberry, P. Turner (Independent), J. Bywater from London and J. Tack.

“The collections at all the services were pretty good, considering the high price of provisions. We have collected £38, and are engaged in collecting the remainder required by rule. One backslider was reclaimed on the evening of January 6th.”

The photograph of the chapel interior is from a postcard that was never sent so is undated.. However, the minister is named as Revd Gervase Hall, and he was at St Neots (Eynesbury is in that circuit) between 1897 and 1900.