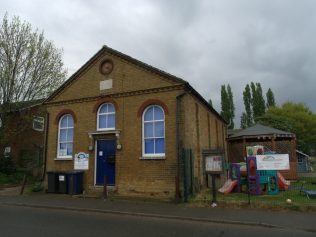 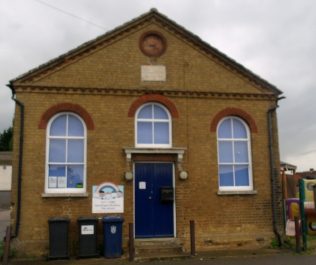 “For about ten years our people have been labouring under many discouraging circumstances at Gamlingay, for want of a suitable place in which to worship, having only a cottage for this purpose, and frequently nothing but the open air. But having at length obtained an eligible plot of ground a little distance from the cross, we have erected a neat and substantial chapel.

The collections were good at all the services, and we have let all the pews. It is a very neat chapel, and is likely to do well. The total cost will be about £160. We have collected £32, and are actively engaged in collecting the remainder required by rule.”

There is a further report in the 1870 magazine, this time by Oliver Jackson , about the chapel’s re-opening on Sundays 8th & 15th May 1870.  Speakers included Rev Jackson and Rev John Rackham. They had  remodelled the chapel built 14 years previously making it 18′ longer and holding 14 extra pews.

The chapel was located at Green End and was a plain yellow brick building; it was registered in 1856. It was purchased by the county council in 1958 for use as a primary school. On Google Street View in 2009 it appears in good order, still  used as a school.