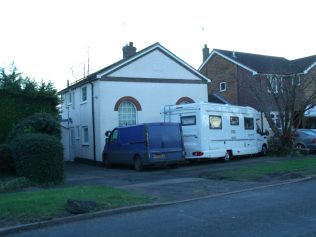 Sharpenhoe is a hamlet in the Bedfordshire parish of Streatley. The hamlet is at the foot of the hills known as Sharpenhoe Clappers, part of the Chiltern Hills and in the care of The National Trust.

The foundation stone of Sharpenhoe PM chapel was laid on 6 September 1858 by Mr G Hunt of Luton. A report in The Luton Times noted how some of the residents of Sharpenhoe had wanted a place of worship for a long time, but had been unable to find a suitable piece of land. However, ‘after many prayers, doubts and fears, God granted them their hearts desire by pointing to Wm Greaves, Esq, Baptist, Hitchin’ who donated the land. The stone laying raised £12 1s 0d towards the building of the chapel.

The Chapel wasn’t registered for worship until 3 January 1861. Thomas Huckle of Luton, bonnet manufacturer (trustee) made the registration. When in 1879 Primitive Methodism in Luton was divided into two Circuits, Sharpenhoe became part of Luton I Circuit. In 1933 following Methodist Union, Sharpenhoe became part of the High Town Circuit. The Luton Times and Advertiser of 18 January 1862 noted that Revival Services were held in Sharpenhoe Chapel, ‘very earnest exhortations have been given by young men from Dunstable and other friends.’

The Chapel was listed in the 1908 Places of Religious Worship and evidence of chapel life includes a Missionary Service held in 1909. The licence for worship was cancelled on 8 September 1964 and the Chapel is now a private house.