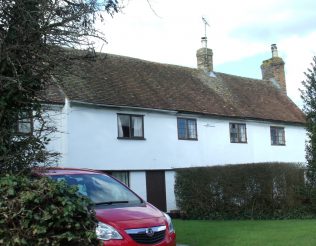 Situated between Bedford and Luton, the village of Silsoe is now bypassed by the A6.

A dwelling house in the occupation of Jacob Swannell was registered for PM worship by Edward Bishop, 6 Adelaide Square, Bedford, minister on 27 February 1861. In 1856 Swannell had been occupying a cottage in West End (the middle of the cottages illustrated).

However, the Bedfordshire Community Archives page on PM in Silsoe notes that previous attempts to establish a Methodist presence in Silsoe had been unsuccessful due to opposition from the Wrest Park estate. The Silsoe PM did not prosper and the registration for worship was cancelled on 29 August 1894.

A footnote is that in 1995, the musical Jubilate was performed in the gardens of Wrest Park organised by Rob Frost and his team.