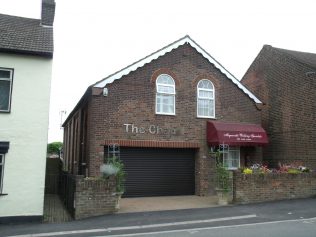 The Bedfordshire village of Slip End is situated south of Luton. The former Primitive Methodist Chapel built in 1868 is situated in Church Road. Slip End PM cost £216/15/3 to build and could seat 200 people. The chapel was originally part of the Luton PM Circuit until 1879 when it became part of Luton II Park Town Circuit and from 1901 Luton III Mount Tabor PM Circuit.

In 1894, The Luton Times and Advertiser of 18 May reported that the anniversary services for Slip End PM Sunday School had been held, when ‘the chapel was crowded on each occasion’. This was followed on Monday by the annual tea. Then on Tuesday evening ‘Rev JW Coad delivered a most amusing and instructive lecture on Phrenology.’ In October 1894, the same newspaper reported how members of Slip End Chapel ‘determined to make special effort to raise £80, of which £50 was to clear off the debt on the chapel and £30 for the renovation of the building’. At this stage the debt on the building had been cleared.

Slip End PM provided a useful venue for community activities. So for example in July 1895, the Luton News & Advertiser reported that it was one of the venues in which Lord Battersea and Mr Ashton spoke in support of Mr Ashton’s candidature as an MP.

In 1902 and 1930 further repairs and refurbishment work were carried out to the chapel.

In 1973 Slip End PM chapel closed. Having worked for a number of years with Pepperstock Baptist chapel, the Methodist congregation amalgamated with them.

A History of Caddington and its People – Frank Sutton