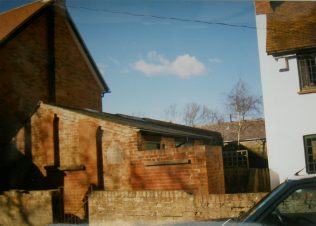 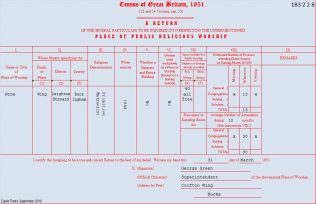 In the 1830s  small Methodist group regularly met in one of the cottages within the hamlet.  On Census Sunday in 1851 George Green, the Superintendent, records that 13 people attended the afternoon service; the average attendance was 30.

With a loan from Lord Rosebery of a plot of land, the Primitive Methodist chapel was opened in 1889.

The last service was held in the chapel on 22nd December 1968 after which it was sold by the Rosebery estate.   Due to its poor condition, the roof was removed and the building converted to a lean-to in the grounds of Rose Cottage, as shown in Keith Guyler’s photograph in 1999.

However, on Google Street View in July 2011 some of the original facade with has been rebuilt.  It includes its stone date tablet in what would have been a doorway.