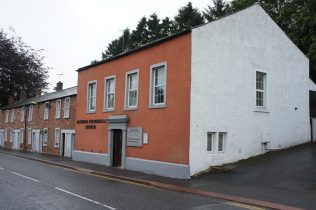 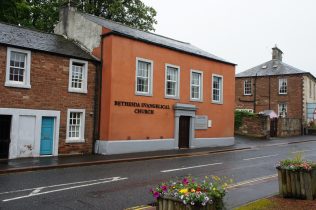 This was the first Primitive Methodist Chapel in Brampton, and is now used by Bethesda Evangelical Church. A second Chapel was built in 1879.

In 1821 William Clowes heard of a revival in the Carlisle district. He made his way from Tyneside, and preached in Brampton on Friday, 1 November 1822, in the house of William Lawson. William Lawson later became the pioneer of Primitive Methodism in Canada, and founded the town of Brampton in Ontario.

The first meeting place of the Primitive Methodist society was in a room over the Stables in the ‘Scotch Arms’ yard.

In 1826, William Lawson described what was happening in Brampton:

‘For some time past, there has been what I call an extraordinary outpouring of the spirit of God on the members of our Society; such a manifestation of Divine power, that, unable to support it, they have fallen to the ground. The persons exercised have been various, and the manner somewhat different. Some have fallen while engaged with God in their prayer closets, some while visiting the sick, some under the preaching of the word, some in the time of singing, and some in the time of prayer. They have been men and women, young and old, new converts and old professors; those who considered it the work of God, and those who were opposed to it. A few careless sinners have also been struck down with this wonderful power, have cried to God for mercy, and have (prayer being made to the Friend of Sinners for them) obtained salvation.

That this work is of God to me is very evident from the following reasons: As far as I am able to judge, all whom I have known to be thus exercised that are members of our Society, are upright Christians, who ornament their profession by an exemplary life and conversation, and as such would not attempt to impose upon their fellow Christians; and they universally testify, that they feel unspeakably happy, and experience their souls to be deeply baptised with the Holy Ghost, as with fire, during such exercises.’

In 1829 the first Chapel was built, largely through the efforts of John and Nancy Maughan.