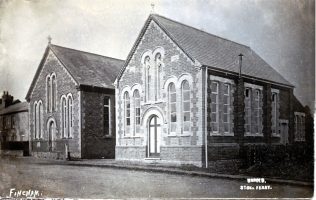 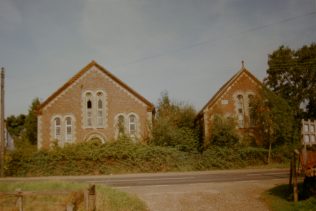 zoom
1878 Fincham Primitive Methodist Church with 1904 Sunday school in 1997, when it was unused and derelict
Keith Guyler 1997

This picture shows Fincham PM Chapel, although I think it might be the schoolroom in the foreground and the chapel is the building of which only half is visible.  The original postcard has two almost identical buildings side by side.  It is addressed to my grandparents (Rev and Mrs F.C. Davidson) when they were in Basingstoke (1921-4) and dated 29th December 1921.

My great-grandfather (Rev James Davidson) was minister in the King’s Lynn Circuit in 1899 and nearby Downham in 1900-02, when my grandfather was growing up, and lasting friendships were made there.  The people of Fincham gave my grandfather a Gladstone Bag when he went away to Manchester to Theological College in 1902, as he records in his diary.  Then my grandfather himself was minister at Fincham 1915-21.

The message on the back of the postcard reads:
‘Dear Friends, Thanks for P.C. Hope you are all well.  We have had a Happy Xmas, 10 of us went carol singing and have collected £2/10/-.  I have a few more calls to make. It is for S.S.F.  Had two good services on Sunday.  Hope you are having a good time.  Best wishes for the New Year.  Kind regards, Yours sincerely, M.& A.& M. Woods.’