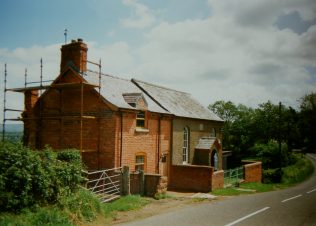 J Webster writes in 1863 about the opening of a new chapel in the Bishop’s Castle station at The Green.

I had initially the slight problem that before I could explore whether the chapel still existed, I needed to know where The Green is – or was.   I did know it was not too far from Bishop’s Castle so most likely in Shropshire. Thanks to Paul Wood and Philip Thornborow for help in tracking it down and to Philip for discovering that it is still an active society.

I then discovered that the best place to look for information on Prim chapels was this site – and the chapel already had an entry here, albeit as Green rather than The Green, and listed under Welsh chapels rather than Shropshire. It was one of the chapels photographed by Keith Guyler in his remarkable archive of Methodist chapels. Keith Guyler’s  notes say  that the chapel was opened in 1862 (in accordance with the Primitive Methodist magazine account)..  At the time of the photograph on that site (2005), on Google Street View in 2009 and the Methodist Church Find a church webpage in 2020, the chapel was still in use.

“The Green, Bishop’s Castle Station. —Through the blessing of God, and the kindness of friends, we have succeeded in the erection of a neat and comfortable chapel at this place. The foundation stone was laid on May 28th, 1862, by Miss Farmer, of the Down, in the midst of a large concourse of people ; after which, a tea meeting was held, when about 380 sat down to the social board. Sermons were preached in connexion with the opening, on November 2nd, by S. Ward, Esq., of the Wood, and Mr. J. Jones, Llandyssil.

And on November 9th, two sermons were preached by J. Nott, Esq., of the Farlands ; on November 3rd, about 270 sat down to tea.

The pecuniary result of the collections and tea meetings is more than £40. The amount of donations is not yet ascertained. The cost of the chapel is about £150.

Whilst we are grateful to all the friends, who have interested themselves in the erection of this house of prayer, we desire to make special mention of Miss Farmer, who gave £10, Mr. Maddox, who gave the land, and Brother John Davies, the treasurer, who in various ways has manifested his interest in this work. J. Webster.”