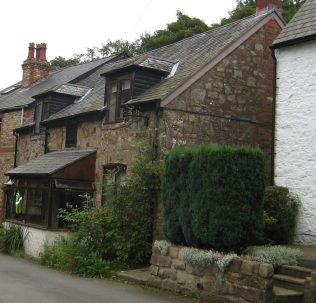 This chapel, according to the plaque over the door, was built in MDCCCIX, which is 1839. The plaque also says Primitive Methodist Chapel, and adds the text, What hath God wrought. Num XXIII.23

I do not often drive through Pontfaen, but I seem to recall the house (which the chapel has become) looking much more obviously a chapel not all that long ago, before the serious alterations disguised it further. But the black plaque is still easily legible.

The text from Numbers comes from the story of Balaam and Balak. The enemy of God’s people was trying to raise a curse against them, but instead God blessed them repeatedly, and the prophet says (in my newer translation), “What has God wrought!” God was certainly blessing Shropshire through Primitive Methodism in the period when this chapel was erected for his worship.