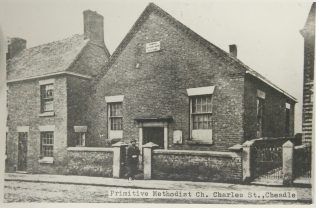 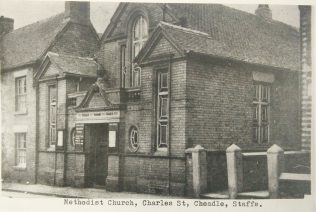 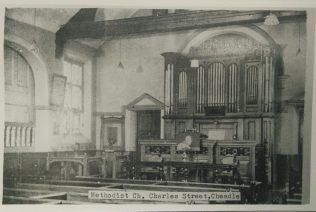 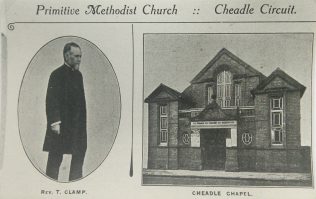 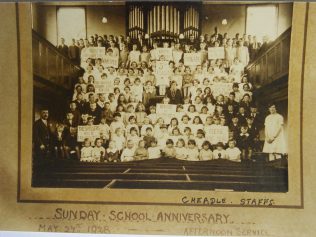 zoom
Cheadle Charles Street Methodist chapel Sunday School Anniversary afternoon service 1928. Lizzie Young believes that this is not in the Primitive Methodist chapel and suggests it might be the Wesleyan.
Englesea Brook Museum picture and postcard collection 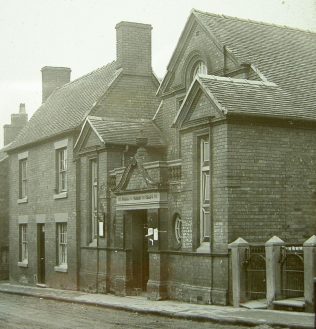 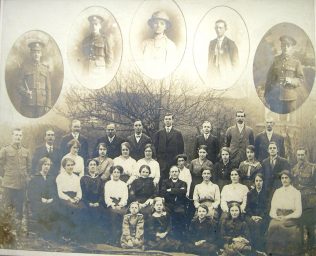 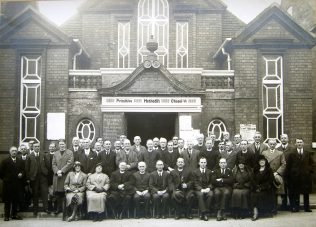 Google Street View shows the double fronted chapel at 24 Charles Street as disused in both 2009 and July 2016. In 2018 it is in residential use.

The Primitive Methodist Museum at Englesea Brook has several  photographs and postcards labelled “Charles Street Cheadle Primitive Methodist chapel” together with three glass slides.  We were unsure of the story behind them until we heard from Lizzie Young who was living in the chapel in October 2017; see the comment below for the full picture.  This page has been redrafted to take account of the new information.

Photo 1  is of the chapel as first built, with the stone date tablet PRIMITIVE METHODIST CHAPEL A.D.1848.  It is on the same site as the current building, as you can see from the former manse house to the left and the singular gateposts on the right.

Lizzie Young tells us that ” In the 1870s they built on the twiddly bits and porch at the front, seen in your other photos. They also extended backwards, considerably enlarging the chapel.…… the gates to the right of the Primitive chapel are outside the Manse. And the building attached to the left was the caretaker’s cottage. The Primitive Methodist Sunday school building was built onto the back of the caretaker’s cottage in the 1870s and connected to the main chapel via the large panelled doors/openings to the left in one of your interior shots.

The chapel was deconsecrated in the 1960s. “

On the other side of Charles Street, just north of the Primitive chapel, there is the current (2016) Methodist Church Hall which on Ordnance Survey maps from 1880 is labelled Sunday School (although that label is not directly on the building and could relate to other chapels in Chapel Street). It is in fact the former Wesleyan Sunday school, built behind the former Wesleyan chapel in Chapel Street.