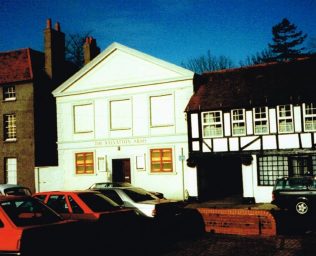 The British Listed Buildings website describes this chapel in 1990 as an early 19th century chapel, added to and altered in 1930.  It is made of Bargate rubblestone with brick dressings, the front being of painted brick in Flemish bond. The roof is concealed and made of of corrugated iron.  it says that the building was a Congregational Chapel in the 1830s and more recently a Salvation Army meeting hall.

At the time of inspection it was in a state of disrepair, but on Google Street View in January 2009 it appears to be in good condition.  However, it does not appear in response to a “find a church” entry for Godalming on the Salvation Army website in 2015.