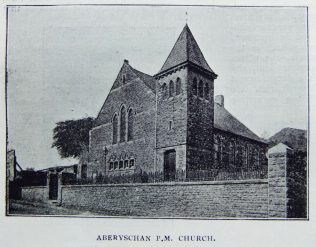 Opening services took place on 21/07/1833 and the preachers were J Grieve and Rev S Price (Baptist).

There’s a picture of the Aberyschan chapel in the 1904 Christian Messenger, although a couple of letters in the name have been reversed.  At that point it was in the Pontypool circuit.