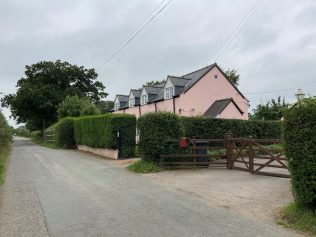 An 1857 Plan mentions services at a chapel in Crab Tree Green, Denbighshire, in the Wrexham Circuit. A quick search of the digitised “Wrexham Advertiser”, which has been digitised only up to 1900, found a number of references, but there are probably a lot more for anyone who wishes to take the time to search for them. Harvest services are mentioned in a couple of them in the 1890s.

An interesting article, on page 6 of the issue of 26th June 1875, tells of what we must, I think, call a ‘camp meeting’. It was mounted by the people of the Primitive Methodist chapel, Crab Tree Green, the Calvinistic Methodists of Salem Chapel, Stryt-yr-Hwch, and the Independents (i.e. Congregationalists) of Ebenezer Chapel, Erbistock The morning open-air service, held in a field at Gyfelia, attracted 200 people; the afternoon and evening ones, at Crab Tree Green, drew 500. I have not been able to identify the preachers, who were J. Meredith of Rossett and Rev. James Williams of Chester.

The chapel stood at the bend in the lane at grid reference 335446. By 1912 it had disappeared from the Ordnance Survey maps.

“Eaton was the first place visited by the Primitive Methodist missionaries in this station near thirty years ago. Since then the society has passed through various trials incidental to cottage preaching. Of late, brothers E. Allen and P. Woodall have made us every accommodation that small cottages could afford, for which the society is grateful.

Within the last two years the Calvinistic Methodists have built a new chapel, and the one they did occupy became vacant. This chapel we have taken on rent. It was formerly let for £6 yearly, but through the kindness of the owner, it is let to our society for £2 per annum.

On Sunday, April 20th, 1856, W. Sapcoat preached three opening sermons to overflowing congregations; a good influence attended the word, and the collections exceeded our expectations. On the following day, an excellent public tea was provided, to which 140 persons sat down. A public meeting was held afterwards, which was addressed by Messrs. R. Davies, R. Hamner, S. Ellis, E. Jones, and W. Sapcoat.

The proceeds of these services have been applied to the fitting up of the chapel. These are the property of the Connexion, and the expenses were all met. To God be all the glory!“