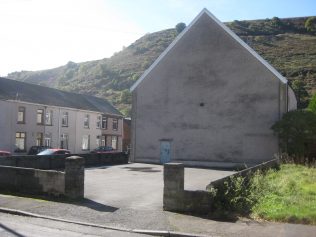 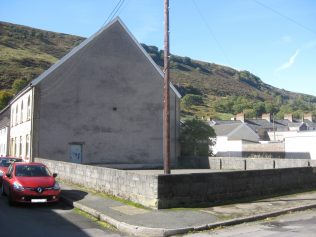 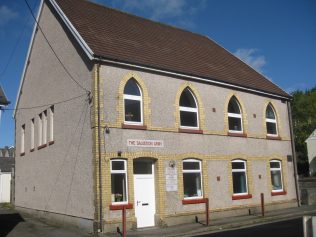 In 1910 The Rev. Edward Clements was posted to the Ebbw Vale Circuit. He describes it as ‘a good circuit’ the churches occupying good positions in their neighbourhoods.

In his journal which can be seen at Englesea Brook Museum he writes:-

‘I have to record here one of the rashest undertakings in Chapel building that I have ever known. Our Society at Cwm had a small out of the way building. There were some good men here, and the neighbourhood was rapidly developing. They felt that the time for building a new church had come. An eligible site, I believe on a permanent lease, was held. There was very little cash, in hand, but they believed that with the public sympathy that was evident money would come in when building operations began. We had no wealthy folk but wages were good. Before I arrived, during the interregnum, the Trustees signed a contract for Church and Schools to cost about £2,500. When I reached the Circuit I was astounded at the venture. There wasn’t £100 in hand. Sanction had been obtained from the Building Committee for a smaller outlay. There was nothing for it but to go forward and trust that the scheme would succeed and that the money would come in as the Trustees believed it would. We worked hard and raised a fair sum at the stone laying though the weather was unpropitious. The opening in due course had premises that were a credit to the Connexion. The bank authorities were considerate and advanced the money required and of course we sought and obtained some Connexional assistance but debt seemed likely to crush us. To make the situation more harassing the owner of the adjoining property sued us for damage to his property which the Trustees refused to buy because of its ‘Jerry built’ condition. We won the case and he was to pay costs but he left the country, and as his property was heavily mortgaged his creditors took possession and we were left with the costs of £80. When we came to settle up and prepare the balance sheet we found that our debt £2000 nearly reached the original cost. There was the building committee to face and naturally they took a very serious view and censured the Trustees for exceeding the sum sanctioned but as I had nothing to do with the signing of the contract (nor had my predecessor) they exonerated me from blame.

The one fine thing about it all was the men on the spot never lost heart, they were confident the venture would justify itself. The position our Church at once took in the township was encouraging.

The Building Committee supported my appeals for help and fortunately Sir WP Hartley’s Fund for needy cases was functioning and the committee offered us £1 per£1 on the first £500 in 3 years to begin with . The Trustees said ‘stand by us and we will stand by you’. Work out a scheme of weekly contributions and we will meet it.’ I worked out such a scheme which was to cover interest and the amount of principal we had to raise in 3 years and they loyally accepted and some of these miners and petty officials gave from one shilling to five shillings each per week. and on the eve of my removal the amount of £500 was cleared and I had their promise that they would continue their contributions for another £500 when the Trustees would be in a position to borrow from the Chapel Aid Association. I cannot speak too highly of the spirit and loyalty of these people. The Trustees realised they had created the situation, they believed it would justify itself. They never sought to blame others, but bravely, and without the least misgivings shouldered the responsibility and came triumphantly through. At Cwm we have a splendid suite of premises – seat 550 also school and classrooms – and the growth of the cause has been full of encouragement.’

In October 2017 the chapel no longer exists. All that remains is the empty space where it once stood (see photos 1 & 2). The building behind it was probably the Sunday School. (see photo 3) It is now occupied  by the Salvation Army.

The above extract from Rev. Edward Cements’ Journal is reproduced here by kind permission of Mrs. Janet Field. Rev. Edward Clements was her grandfather.