You are here: HomenextPlacesnextHampshirenextPrimitive Methodist Orphanage 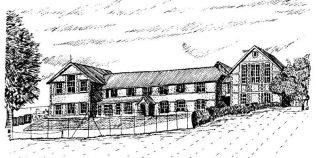 My father’s family, the Archer family one of a couple of Archer families, in Bermondsey, were Anglican and attended St. James Anglican Church in Bermondsey. He was Thomas Charles Archer and his father was Charles William Archer.When Thomas was about four years old, which would be about 1908, his father, Charles William Archer, died. His mother, maiden name Cawley, could not cope so had to put Thomas into an orphanage. The orphanage Thomas was put into was the Primitive Methodist Orphanage in Old Alresford. My father told a story that they were marched over a bridge across a river, on Sundays, to attend a Primitive Methodist Church in New Alresford. The orphanage was built out of flint.He had all his schooling at the Orphanage.