You are here: HomenextPlacesnextYorkshirenextH - NnextLeeds: Evangelical Tent Mission in Leeds 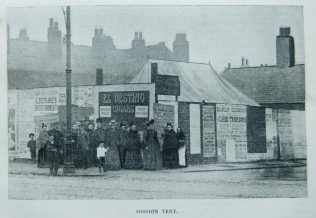 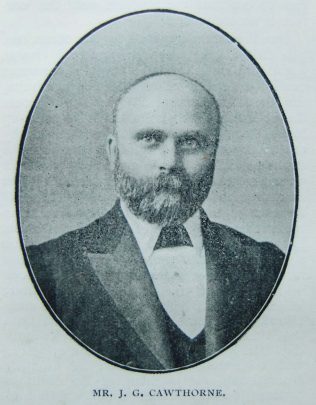 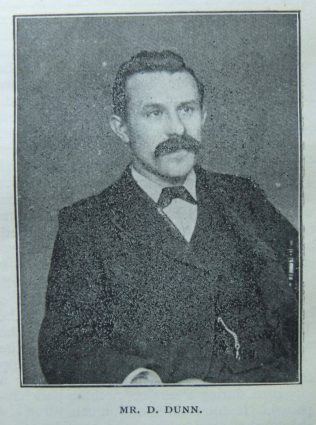 Transcription of Article in the Christian Messenger by Thomas Clamp

During the progress of Leeds Tent Mission a layman of a sister church volunteered the opinion that low as Christ stooped to save men, there are those among His disciples to-day willing to follow his example in any necessary effort or sacrifice to regenerate the human race. The words were received with some measure of reserve, but on reflection the conviction has grown, upon us that they have fact behind them. And why not? Is not this the New Testament ideal? Christ’s unalterable decision of true discipleship? And there is more of this Christian altruism in the world today than the present age takes credit for. It may, for the most part, be hidden and silent, like the leaven in the meal, but is nevertheless real, and ready for opportunities to express itself. The words of our friend were characteristic of the movement which suggested them, and of the atmosphere on which they went forth. It is not claimed for this movement that it solves the whole problem of saving the masses, or that in it is the panacea for all and sundry forms of religious indifference, but it has, among other things, laid bare the fact that in our churches is much latent energy waiting only for the occasion for making itself felt in work close akin to that in which Christ Himself wrought.

Another conviction deepened by this mission is that Church leaders have but to show a programme of work, having in it the elements of reasonable success, and many who hold the purse-strings of wealth are prepared to give their support. All the wealth of the age has not gone wrong. There is much still being kept for the Lord’s annointing, and His verdict on it is that they have “wrought a good work on Me.” But is it not to be expected that men shrewd enough to make capital will be shrewd enough to expect reasonable results from their liberality? “I know I ought to give,” said a gentleman a while ago; “I expect to give, and, indeed, want to give, but don’t care to throw my money into a pit. Show me you are doing something and I will help you.”

The genesis of this Tent Mission can be told in a few words. A Church Extension Fund meeting was being held. The advocates of this fund, in casting about for arguments in its favour, took under review the relative increase in local Primitive Methodism as compared with the increase in city population. The result was by no means flattering. The usual humiliations, confessions, vows, and appeals followed. But among the most practical was the offer by Mr. W. Beckworth, J.P., of a Mission Tent fully equipped and furnished for use in the City Circuits, on condition it should be vigorously worked on suitable lines. Within a week the offer was formally accepted on resolution by the Primitive Methodist Council. Later on a Committee of Management was appointed, with Messrs. J.G. Cawthorne and D. Dunn as its Secretaries. The tent measures 60ft. by 30ft., and has capacity for from 350 to 400 hearers, but on account of the difficulty in obtaining large suitable sites in the city centre, it can also be erected at 45ft. by 30ft. It is seated principally with chairs, lighted with petroleum, and a small platform does duty for speakers and harmoniumist.

The method of working adopted is the simplest. It was offered for a fortnight each to the eight circuits on condition they secure a site, find labour, light, advertising, and caretaking. Four circuits  made application, and in one instance – the Central Mission – it was undertaken for a second time. The aggregate collections were in advance of the total expenditure, although some centres only made occasional collections. In twelve weeks no fewer than 116 services were held. The stations report 338 persons as having taken part as conductors or speakers, but we fear these figures overlap, as some persons took part at more than one centre. It is also reported that 116 persons served as soloists, and many were requisitioned as instrumentalists, while others found happy work in street processions, house to house visitation, and in instructing and praying with the 90 penitents who came forward for salvation.

The ground covered by the respective centres widely differed in both social and moral character, but in no case can it be said to have wholly failed, although the success attained was a varying quantity. At Upper Armley the attendance on several occasions was so great that the tent sides had to be removed, and from 800 to 1,000 persons formed some of the audiences. At Cardigan Road good companies gathered except when competition was found in the open-air concerts of an adjacent park. Craven Road was found to be difficult ground, with a large population not much given to church and chapel going, but several of the services were of an excellent character, and a number professed conversion. At Burley Road, and New Wortley, were large congregations, stirring services, and converts.

One of the most daring things was thought to be the pitching of the tent within a hoarding in Park Lane, a little west of the Town Hall. It was prophesied that the ropes would be cut, and, not unlikely, the tent sent up in flames, and “heaven help the caretaker!” But, apart from cutting a guy rope during a service, nothing bad happened. It took time and much effort to secure the good wishes and confidence of the neighbours, but in most cases this was done. Some extraordinary services were held here. Among the hearers were some of the worst, and, being near to a number of houses, some could hear in their homes. Occasionally a drunken husband would call out the name of his wife through the canvas with peremptory orders to “come home.” During singing a crowd would frequently gather around the tent sides. Sometimes considerable change would take place in the congregations, coming and going being allowed if the whole evening could not be given. At times divine power was so much in evidence that it was a question of either go or yield, and too many preferred the former, so it would appear; but not a few showed contriteness and sought pardon. Reformation to many such is no trifle, and the effort needed to permanently effect it is only known to those intimate with their homes and inner life. In some, the attempt had much of the passing morning cloud, but others declared their intention to continue the struggle until the warfare is accomplished.

One condition imposed by the committee was that a caretaker should be in charge night and day. Some strange experiences could be related as to occurrences during the few quiet hours of city life. Many were the solicitations to be allowed to take up lodgings under the canvas, sometimes by characters scarcely eligible. One night a strange-looking man appeared with a woman’s jacket, which he implored the man in charge to buy cheap for his “old gal.” Another night a well-dressed man came to report that a guy rope of the tent was loose, but omitted to add he had caused it to be so as part of his plan. As the caretaker rushed out to rectify matters, the visitor took a look round as to what was the best thing loose. He took a special fancy to the caretaker’s gold-rimmed spectacles, which from that time had the benefit of a week’s holiday. In a few days a second man appeared and volunteered information as to their whereabouts on payment of six shillings “money down.” The money was not to hand, but an appointment was made for the next day, when the visitor fell safe into the arms of a policeman in waiting for him.

Among the results of the Tent Mission must be reckoned the more vigorous life which has seized the Council having oversight of it, which, with a freer intermingling of the stations and churches, is rendering greater things possible. Since writing the above, a great united Mission has been entered on in the Grand Assembly Rooms, New Briggate, with the Rev. E. Dalton  as Missioner. Premises have been secured for some time past by Rehoboth Mission in a lapsed district where the tent furniture has been utilised in services specially arranged for the outsider. There are also advanced arrangements for tent work during the coming summer, with a special agent to assist in the working of it, and the promise of an additional tent if demand is found for it. A word of praise is due for the organising genius of the two secretaries, whose portraits we give.