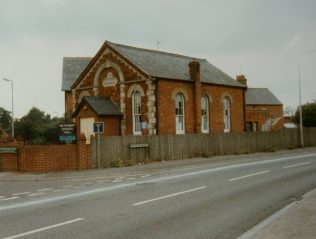 Stroud Green Primitive Methodist chapel was built in 1874 and was deconsecrated and converted into a distinctive private house in 1989.  The society amalgamated with Northbrook St Wesleyans.

It was first missioned ten or twelve years previously “amidst raging persecution” and a piece of copyhold land was obtained by Mr Waite and William Heath from John Berry. The new chapel was 18′ x 22′ and 11′ high to the ceiling, built of flint with stuccoed walls both inside and out.

It was opened on 24th July 1853 with a tea meeting in Mr Vick’s barn. Sermons were preached by John Knight, W Isaac (Independent), WH Whittington and Messrs Outridge, Vick, Rust and Waite. The total cost was £86, of which £20 was raised in opening collections, £50 borrowed on a note of hand, leaving £16 to be raised.