You are here: HomenextChapelsnextLincolnshirenextGnextGrimoldby and Manby Primitive Methodist chapel 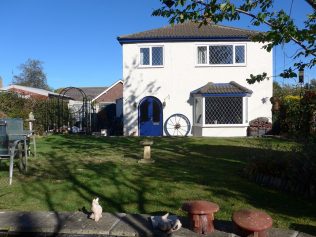 Getting a Primitive Methodist chapel at Grimoldby and Manby in the Louth circuit took a long time. A site was eventually obtained between the two villages and a new chapel opened on September 28th  1853. It will seat about 130 and cost £150 of which £55 had been raised. Particular donations came from Mr Ellerby and family, Mr & Mrs Byron, and Mr & Mrs Maltby. Details are given in the Primitive Methodist magazine by Hugh Campbell

The chapel is marked on Ordnance Survey maps at the junction of Tinkle Street with Priory Lane. It is named on the 1951 map but by 1956 although the building is still there, the name has disappeared. Given that in Priory Lane there is Old Chapel House, it is likely it has been converted into a house.