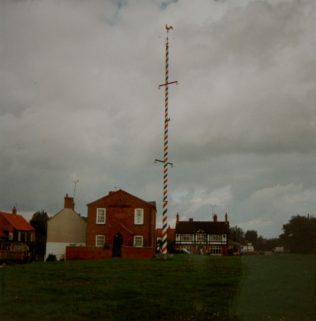 In 1847, the Primitive Methodists erected a chapel in the village, more or less on the village green itself.  The maypole is clearly visible in Keith Guyler’s photograph. A Wesleyan chapel had been built in the village in about 1835, but was replaced in 1854.

In the 1850s, the village population reached a peak of 597 inhabitants. The 1851 religious census shows that the parish church had 107 free spaces and a total of 199. The weekly Sunday service alternated between morning and afternoon, with average attendances given at 50 and 80 respectively. This compares to an average congregation of 40 in the Wesleyan chapel, but 110 for afternoon and 225 for evening services claimed by the Primitive Methodist chapel.

The Primitive Methodist chapel closed in 1986.