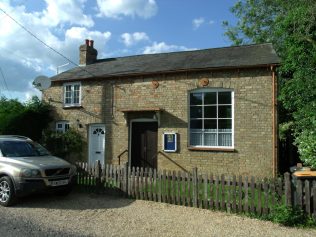 The village of Colmworth lies on the east side of the B660, north of Bedford. Tucked away peacefully in a side lane, the former PM Chapel is a pleasant brick building.

The 1851 Religious Census made on Sunday 30 March includes a return made by Isaac Gadsden, Local Preacher. He stated that ‘This place of Worship is a house one room is on purpose keep only to Worship God in’. The return stated that there were 100 free sittings and that day there had been 30 in the afternoon congregation and 60 in the evening.

Colmworth PM chapel was registered for worship on 28 February 1854 by Henry Kent of Bedford, baker (trustee). Whether this building is the one still standing is unclear because this building has the date inscribed as 1866 and the 1898 Kelly’s Directory states the same year.

The chapel was a founding member of the Bedford Primitive Methodist Circuit in 1867. When this Circuit divided in 1897, Colmworth became part of the Bedford I (later Hassett Street) Circuit.

The Chapel was included in the Bedfordshire Places of Religious Worship list of 1908, but in ‘Know your Colmworth’ by Thelma Marks, it is stated that the chapel closed in 1911 and  became an Independent Mission.

Know Your Colmworth – by Thelma Marks