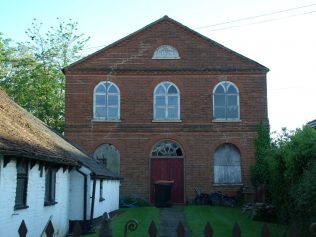 Hockliffe is a village on the A5, Watling Street north west of Dunstable.

On 28 August 1862 a Primitive Methodist Chapel was registered for worship by William Beckitt of Woburn Sands, minister. This chapel was a converted cottage which was purchased for £60. The alterations and fittings cost in the region of £35.

The Chapel had been opened on 31 December 1861 when amongst the congratulations at the opening of chapel it’s member were ‘urged’ by one speaker to ‘united and preserving efforts to save souls from death’. Another speaker said that ‘the Primitives had converted a notorious house of ill fame into a sanctuary for prayer and the preaching of glorious Gospel of the blessed God’.

As with many chapels an annual trip or treat was organised. For example, in 1898 the excursion was made ‘by brakes’ to Bletchley Park, ‘by the kindness of Mr HS Leon’.

By 1913, the Hockliffe PM Chapel was no longer suitable and the congregation rented the Congregational Chapel for 7 years when it returned to that denomination.

When the original PM chapel closed it became a Carpenter’s shop, but was demolished in 1933 as part of a widening of Watling Street. However, the registration for worship was only cancelled on 4 April 1935.