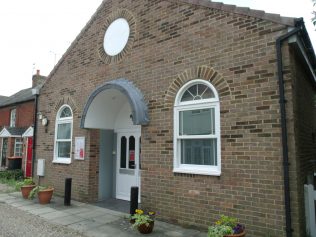 From local entries in the newspaper entries, Eaton Bray PM was in existence by 1870, but there are no registration records. The chapel was located in Booth Place. The Bedfordshire Community Archive website shows the PM chapel on the 1st edition 25 inches to the mile Ordnance Survey map of 1880 and states that the 2nd edition of the map in 1901 showed the chapel as being a Salvation Army citadel.

Reports in the local newspapers give a flavour of PM chapel life in Eaton Bray. For example, Luton Times and Advertiser 30 July 1870 reported that for the chapel anniversary no less than ‘three sermons were preached by Mr T Butler, a converted collier’. On 13 August 1870 the same paper reported Rev GG Pinder preached twice when the ‘united choirs of Eaton Bray, and Totternhoe sang and scholars from Dunstable, Stanbridge, Eaton Bray and Totternhoe assisted.’ The Leighton Buzzard Observer and Linslade Gazette 14 February 1871 reported that sermons had been preached in the chapel ‘on behalf of Primitive Methodist Home, Foreign and Colonial Missions’ when the chapel was ‘well attended and liberal collections were made after each service in aid of the funds of the above missions.’ Whilst the Luton Times and Advertiser 14 January 1871 reported that at Eaton Bray, Totternhoe choir had given a concert of sacred music which ‘consisted chiefly of Handel’s Messiah and Dettingen’s [sic] Te Deum.’ Then in 1879, the Leighton Buzzard Oberver reported a lecture being given by Mr JW Stockdale of Dunstable entitled ‘Old Rags’ when the speaker ‘stated the various ways in which old rags could be made useful’.