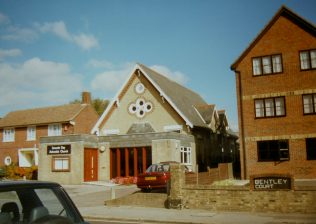 The Shirley Road Primitive Methodist chapel shown in Keith Guyler’s photograph is the third in the Freemantle area.  The first was in Firgrove Road in 1869, followed by a second in Richmond Road in 1902.

The Shirley Road chapel was opened in 1909 but closed after it was damaged during the Second World War.  At the time of the photograph in 1997 and on Google Street View in May 2014, it was used by the Seventh Day Adventists.