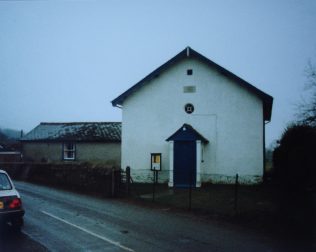 zoom
St Mary Bourne Primitive Methodist chapel with the 1839 chapel in the graveyard to the left of the 1859 chapel.
Keith Guyler 1991 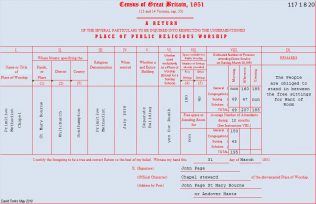 Keith Guyler’s notes alongside his 1991 photograph say that the chapel that he calls St Mary Bourne opened in 1839 and was rebuilt in 1866. However, he has probably confused the date with the building of the Primitive chapel at Stoke in 1866.

The St Mary Bourne Revisited website gives some engaging detail – including surveying the original chapel site by moonlight and getting a stranger to bid at auction for the land so that no-one knew it was for use as a non-conformist chapel!

In the 1839 Primitive Methodist magazine, George Wallis tells us about the opening on July 14th 1838. The village was missioned by Shefford Circuit Primitive Methodists in 1833 but they met violent opposition. In 1838 they purchased 2 tenements and a garden  and the chapel, which measured 32′ by 24′ was erected in the garden . Opening preachers were Bros Ride and Mayford, and Sister Price.

The Victoria County History of Hampshire gives some explanation of non-conformist chapels in St Mary Bourne parish, “There are numerous Nonconformist chapels in the parish: a Baptist chapel at Swampton, rebuilt in 1879; a Primitive Methodist chapel, built in 1859; and another at Stoke, built in 1864. A Wesleyan chapel was rebuilt in 1886, and there is another at Dunley. The ‘Old Book Chapel’ originally used by the Primitive Methodists is now called the St. Mary Bourne Band of Hope Mission Room. The Salvation Army hold meetings there and in the buildings behind known as Workman’s Hall.”

More clarification comes from an article by J Willimott in the 1860 Primitive Methodist magazine.

“A Primitive Methodist chapel was erected at this village in 1838, but being too small to accommodate the increasing congregation and flourishing Sabbath school, the last March Quarterly Meeting decided on building a new sanctuary. The old chapel remains for the use of the day and Sabbath schools.

The new chapel is 37 feet long by 24 feet ; the case was laid before the public, and they have liberally responded to the call. This chapel was dedicated to the service of God on Sunday, October 2nd, when sermons were preached by the Rev. W. Harland, of London. The afternoon service was conducted by Mr. R. Osmond and the writer ; the congregations were large, and God crowned the first day’s services by saving one soul.

On Monday, October 3rd, nearly 300 persons sat down to an excellent tea, which was followed by a public meeting, over which Mr. R. Osmond presided; the writer gave an account of the financial state of the trust property, and was followed by Mr. Harland. The golden system was introduced, when £25 were promised for the first anniversary.

The cost of the new chapel is about £155 ; debt on the old chapel £100. By subscriptions, donations, collections, at the opening services, (fee, upwards of £75 were realized.

This chapel is a credit to the Connexion. ‘May the glory of this latter house be greater than that of the former.’ “

Google Street View in 2011 shows the chapel at Swampton, boarded up but in recognisable condition.  Adjacent to it is a smaller building, the earlier 1839 chapel.