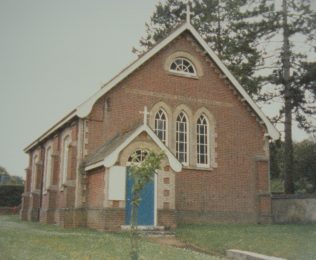 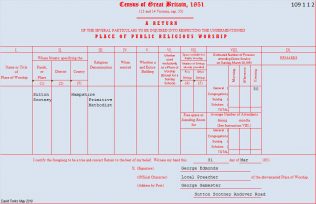 The Return from Sutton Scotney Primitive Methodist chapel in the 1851 Census of Places of Public Religious Worship gives no detail other than the evening attendance on that Sunday was 50 people. The return was completed by George Edmonds, a local preacher with his addres as “George Gamester, Sutton Scotney Andover Road.

The Sutton Scotney Primitive Methodist chapel in Keith Guyler’s picture was erected in 1888.  It replaced a previous building of 1864.  It was known as Ebenezer.

An article in the Proceedings of the Wesley Historical Society by Dr Barry Biggs gives insight into how Primitive Methodism reached villages like Sutton Scotney.

Although living nearly a century after Wesley’s early journeys and during the golden age of turnpikes and coaches, the Primitive Methodist preachers usually walked to their country appointments, on by-ways and bridlepaths. In Southern England agricultural wages had been cut to about 6 shillings per week and many labourers endured wretched conditions. This was the age of the Tolpuddle Martyrs’ . Time and again a welcome came in a new village from someone who had heard the preacher in a neighbouring place and who issued an invitation. For example, in the winter of 1831-32 Thomas Russell, substituting for a sick colleague, walked 25 miles to preach in a cottage at Sutton Scotney. He started out at 7.00 am. and, despite ‘making a few visits on the road’ completed his journey in nine hours.

On Google Street View in April 2011 it appears to be in use as a nursery school.