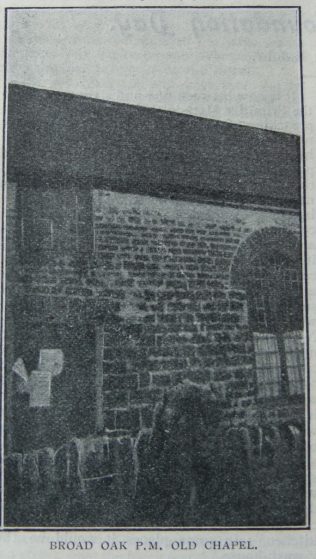 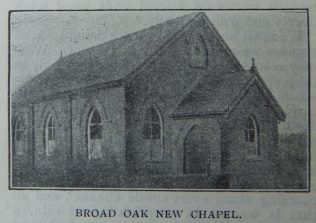 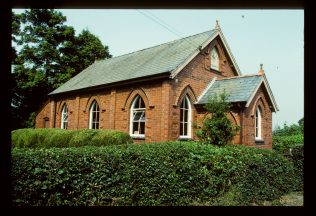 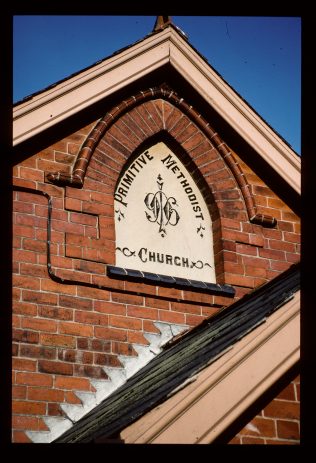 Broad Oak Primitive Methodist Chapel is located within the civil parish of Garway, in south-west Herefordshire. It is set on a hillside above the River Monnow about 10 km northwest of Monmouth. It is a sparsely populated area, mainly agricultural in nature. (Wikipedia)

The hamlet of Broad Oak was the subject of two articles in the 1907 Christian Messenger; the first described the events of Foundation Day and the second the opening of a new chapel. The following is a “brief” summary of the articles.

Broad Oak is situated about thirteen mile south of Hereford, six miles north of Monmouth, nine miles west of Ross and fourteen miles north-east of Abergavenny. The hamlet contained only about a dozen dwellings and if a radius of about a mile from the centre were considered this number increased to something fewer than 50 dwellings.

The first Primitive Methodist preaching place had been established at Broad Oak between fifty and sixty years before. The first Primitive Methodists had been preceded by the Baptists, who had followed the Countess of Huntingdon’s preachers. The chapel being used by the Primitive Methodists up to 1906 had originally been a chapel of the Countess of Huntingdon’s Connexion. In outward appearance there was nothing but the Norman-shaped and extra large window to mark it as anything but one of a row of cottages. Internally it was like a good-sized cottage room, but about twice as lofty, and with a small gallery at the end, beneath which was the door. A built-in fireplace opposite the window suggested the possibility of its having been a kitchen or living room at some period. An adjoining door gave access to a back shed-like apartment under a lean-to roof where a boiler stood that had often done duty for tea meetings. This chamber, in a cottage in that district, would be the “back-kitchen”; in some places it would be the “wash house”.

By 1906 this building had become unsuitable for public gatherings for several reasons, including inadequate space and ventilation, the need for renewal of the structure and furnishings. It was decided that a new building was required for public worship. It took many years to raise the money required to build on a plot of freehold land, which had been given to the society by a neighbour not connected with the chapel. By August 1906 some £70-80 had been raised, sufficient to move on the commence digging/laying the foundations on 20 August.

The Foundation Day celebrations were held on Thursday, 30 August 1906. Some two hundred or so children attended. The guest of honour was the local M.P., Colonel Alan Gardner. Neighbouring Circuits and Free Churches were represented by their ministers. The proceedings were conducted by Mr. John T. Giles, of Monmouth, evangelist in charge of the Circuit.

Seven foundation memorial-stones were laid. The first of these was by Colonel Gardner, who gave an encouraging address. The next stone was laid by Mr. T. King in memory of the late Mr. E. Howe who had made a helpful bequest. The next was laid by the donor of the land. The other four were laid by Mrs. J.E. Bowen; Miss M. Lewis, on behalf of the Sunday school; Mrs. Boulton, in memory of her parents, the late Mr. and Mrs. J. Heath; and by Miss Francis, on behalf of family and friends.

After the laying of the stones an address was given by Rev. George Henry Southall, of Newport. After the formal proceedings the company adjourned to “tea in a tent”. The day raised a further £40 for the building fund.

The Opening Day for the new chapel took place on Monday, 10 December 1906, just couple of days after the chapel had been completed by the builder!

On the previous Sunday (9 December) the children met in the morning in the old chapel, for their last Sunday school lesson. Congregations assembled there in the afternoon and evening for service; and in the absence of the appointed preacher, who failed to arrive, the duty of conducting the closing service fell to Mr. Richard Francis.

On the Monday morning a busy morning was spent getting the new chapel ready for the ceremonies in the afternoon and evening. The chapel was declared open from the doorstep, after the formal unlocking of the door shortly before three o’clock, by Alderman James Farr, of Leominster. Entering the building with the Rev. J.T. Giles, minister of the Circuit, they were followed by the congregation. All the seats were soon crowded. The platform was filled by the Garway and District Choral Society, with Mr. John James (organist of the Parish Church) as conductor; Mrs. Davies (of Orcop) was seated at the new American organ. Mr. Farr ascended to the rostrum and the opening hymn “behold Thy temple, God of grace” was sung. The sermon was preached by Alderman Farr from the passage, Acts 5, 29-31. The first service was brought to a close with the hymn, “O God, our help in ages past”.

Tea was laid on in the old chapel. This was a lengthy process, for only a portion of the company could squeeze in at any one time to the three tables that filled the limited space.

In addition to the speeches there was a full music programme with various soloists, a quartet and items by the choir.

Mr. Giles thanked the many people who had contributed to the building and the days events. The cost of the building had been £205, of which £100 had been paid and a further £22 was in the bank. That did not include the proceeds from the “opening”. The organ had been separately collected for.

The architect for the new chapel was Mr. T. Evans, of Craven Arms, and the builder, Mr. G. Cooke, of Hereford.

Note: Rev J.T. Giles is not listed in Leary.