You are here: HomenextChapelsnextHerefordshirenextS - ZnextStaunton on Wye Primitive Methodist Chapel 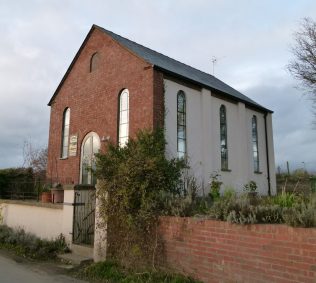 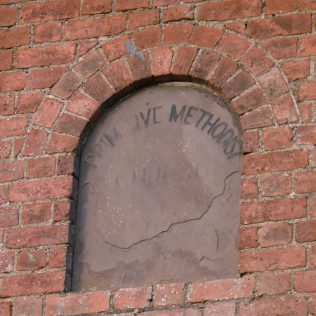 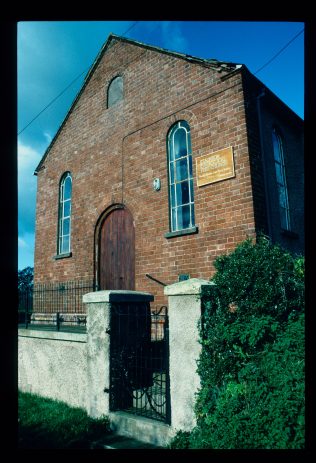 In 2013 the building appears to have been converted into a dwelling. Work in progress in 2009 may be seen in Google Street View via location map adjacent. The wall plaque is only partly legible due to weathering, with only the painted “Primitive Methodist” top lettering fully present. The original wooden notice board for “Staunton-on-Wye Evangelical Church” is still in place and may explain why the building is still marked on Google Maps as a Church.

Herefordshire Through Time web site states :- Staunton-on-Wye chapel stands on the western edge of the village at the side of the main road that leads through the village.

In 1843 the committee meeting minutes mention a preaching room at Staunton-on-Wye but no chapel, and by 1849 the membership was seventeen.

By March 1862 it was decided that there was need for a chapel, and Brother Maskell and Brother Timms were sent to see H. Cottrell Esq. to try and obtain some land on which to place a chapel. They were successful and in 1866 the land was secured. Two years later the chapel, designed to hold 140 people, was completed at a cost of £186.

The membership of this chapel over the years shows early periods of a rise in membership followed by a steep drop in numbers:

In 1885 it appears that the members of Staunton-on-Wye chapel had their differences, and a letter was written from the Quarterly Meeting stating that “This meeting learns with regret of the unpleasantness in the Staunton Society and time it was put an end to”. This appears to have been a temporary problem.

Later on in its life Staunton was transferred to the Bromyard Circuit due to the drop in chapel attendance. This meant, however, that the minister had further to travel and Staunton suffered neglect in pastoral care and leadership, so eventually the number of members was reduced to five or six. Inevitably, Staunton-on-Wye Chapel was closed in 1967.

The key to the chapel was left with the caretaker and as no one asked for it back the small remaining congregation continued to hold Sunday services in the chapel. In October of 1967 someone offered to buy the chapel and the Methodist Society agreed. The building became the Evangelical Free Church and improvements were made to the structure.

Numbers began to increase and the Sunday School became too popular to accommodate all those who wished to join.

By the 1980s numbers had dropped again and the Sunday School was closed due to a lack of young people in the area, but Sunday service continued to be held.