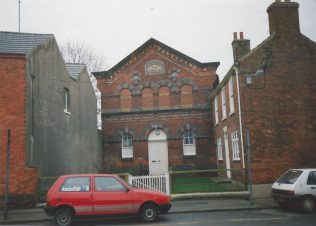 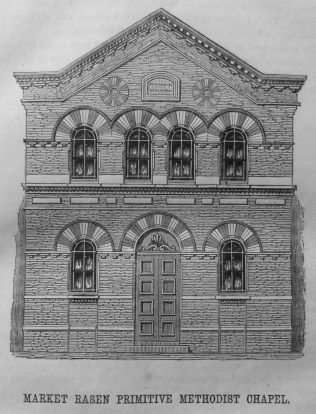 The Lincs to the past website suggests that the Masonic Hall on Jameson Bridge Street was built in 1800, and was originally a Wesleyan Methodist Chapel, possibly with an associated burial ground. The Primitive Methodists bought the building in 1836 although the society predates this by 17 years. William Wombell tells us that celebration services took place on Sun, Mon & Wed. 14th, 15th & 17th May 1837 and they expected the chapel to do well.

However, in the Primitive Methodist magazine for 1856 the chapel is described as “in a dismal garb of grey” and “repulsive … for want of painting and cleaning”. They set to to put this right – and were so enthused they decided to do further work.

The chapel was given a new façade in 1866. In fact, everything was to be rebuilt apart from two side walls and part of the roof.. There’s an account of the foundation stone laying for this in the 1866 Primitive Methodist magazine. Speakers were Rev C Ross (Barton), Rev R Harrison and T Giles.. The foundation stone was laid by Mrs T Campbell (Grimsby); bricks were laid by the Mrs W Robinson, Ellis, J Backworth, T Uny,R Turfleet,  (and her two daughters), Hand, Thompson, Pickwell and Monney, and the Misses A Robinson, Parkes, Elston and Foston.

Lincs to the past website accessed 31st March 2017 at: http://www.lincstothepast.com/Former-Wesleyan-Methodist-Chapel–now-Masonic-hall–Jameson-Bridge-Street–Market-Rasen/234829.record?pt=S