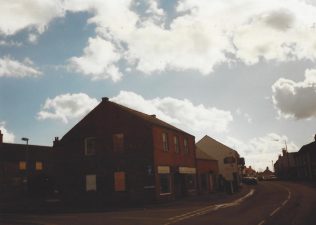 Messingham High Street Primitive Methodist chapel dates from 1822. The chapel in the photograph was opened in 1846 and a Sunday school was added in 1871. It served until 1951.

After closure it was sold in 1953 and was used as a garage. By the time of Keith Guyler’s photograph it was unused.

By the time of Google Street View in 2009 it had been replaced by a newly built Co-op shop.