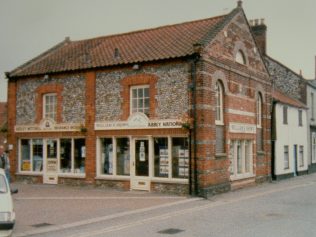 Holt Primitive Methodist chapel was opened in 1872.  It closed at the time of Methodist union in 1932.  There was no way it could compete with the magnificent VIctorian Gothic pile of the Wesleyan chapel.

By the time of Keith Guyler’s photograph in 1987 and on Google Street View in 2011 it was in use as an estate agent’s office.  Interestingly, they advertise their address as The Old Fire Station.