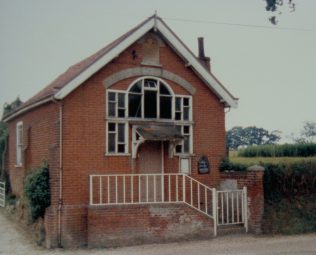 Itteringham Primitive Methodist chapel was opened in 1846.  It was enlarged in 1907.

In the 1851 religious census, Robert Williams, the steward of the Primitive Methodist Chapel, reported a congregation of 49 in the afternoon and 38 in the evening. The total population was 329.

By the time of Keith Guyler’s photograph in 1986 it had closed.