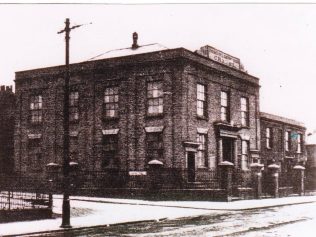 zoom
Dereham Road Primitive Methodist Chapel with the Sunday school building beyond. Infants met in the basement below the chapel.

The vast population explosion which took place in the nineteenth century led to rapid housing development on the edges of Norwich. In the middle years of the century this was mainly along the Unthank and Dereham Roads and the area in between.

A small Primitive Methodist chapel was built in 1850 on Dereham Road just outside the old city walls to serve people in this growing suburb. With an increasingly large congregation, it was decided that the future looked rosy and so in 1864 this building was demolished and a much larger chapel built in its place.  Its cost was £1316.

The new chapel stood on an island boldly fronting Dereham Road and flanked on either side by John Street and Charles Street – presumably named after the Wesley brothers.  It measured about 50 feet by 40 feet and had seats for 400.

It was a heavy building with tall rectangular windows and a central pillared portico.  Doors to the gallery staircases at either side were also flanked by pillars.  There was a shallow pitched roof set well back which gave it a classical air and standing above the main facade was a large plaque with the inscription ‘Primitive Methodist Chapel.’  It was surrounded by a low wall with iron railings and brick posts.

The Sunday school was situated in the rooms beneath the chapel with further classes held in neighbouring cottages and eventually one next to the chapel was adapted and given a facade in the same style as that of the chapel.  In 1871 there were 311 children attending and the following year a day school run by the chapel was opened, but lasted only two years as a result of the competition posed by two new schools in the neighbourhood. Attendance on Sundays was always high. The Sunday School Union report for 1905-6 notes that Dereham Road C hapel had places for 500 children – the number who actually attended regularly was 635.

The year the chapel was opened saw the retirement of Robert Key from the itinerant ministry.  He made Dereham Road ‘his’ church and used his great skills of oratory to attract many to his services. ‘We have seen his congregation leaning forward in the pews like a forest bending under the power of a hurricane,’ wrote a fellow minister. (1)  Key worked ceaselessly and especially supported the Sunday school work during the brief times he spent in Norwich between preaching and lecturing engagements.

Key died in 1876 leaving £100 to the Dereham Road society and two years later a memorial plaque was put up in the chapel. Then in 1891 the trustees ordered an obelisk to be erected on his grave in Norwich cemetery.

Norwich was inundated by a great flood in November 1878.  Many of the streets were flooded to a depth of six feet and the current was so strong that boats could not reach some houses.  A policeman was swept away and drowned as he tried to rescue someone who was marooned and it was said that there had been no comparable flood since 1762.  A letter from an eyewitness, the daughter of the Norwich business man J.J. Colman, described how she stood on what later became Greenhills Road and saw the area below Heigham as a vast lake.  She then went to Dereham Road Chapel – ‘There I found a number being fed with tea and bread and butter and a very few yards from there we saw the water in the street and boats on it.’ (2)

The very large Norwich Primitive Methodist circuit, which for many years had been one, was divided into two by the Conference held in the city in 1892 and Dereham Road Chapel was put at the head of the second circuit.  After Methodist Union in 1932, Dereham Road continued to be the head of a circuit, one of the five in Norwich Methodism.

With the clearing of the slums of central Norwich from the mid 1920s, people moved to the new estates on the edge of the city.  It was vital that churches were built to serve the new areas and at a meeting at Dereham Road Chapel in 1938, it was proposed to move the society to a new venue on the new North Earlham estate.  Attempts were made to find a suitable site and a plot on Bowthorpe Road was identified, but the nurseryman who owned the land was adamant that he would not sell.  Then the outbreak of war called a halt to efforts to move.

In 1942, the chapel in Dereham Road was very severely damaged by bombing and the congregation found itself without a fixed home.  A succession of meeting places was used for worship.  Meanwhile, the site in Bowthorpe Road was put up for sale following the failure of the market garden and in November 1943 a liquidator was appointed to wind up the business and a conveyance was signed between twelve trustees as well as the superintendent minister and the owner of the market garden whereby the land was bought by the trustees for £8000. The Norwich architect and Methodist, Clifford Dann, drew up plans for the new church.  Initially, a temporary building was put up in 1948 for use as a church and this building was later transformed into a school hall.  A manse was built next to the church in 1951 and the old Dereham Road chapel manse in St Bartholomew’s Close was sold.

Whilst arrangements were underway to acquire the land in Bowthorpe Road, a group of young people from various denominations joined together to hold open-air services on the Larkman estate. This work expanded into house visiting and the setting up of a successful group for children. One of the young founders of this group was Norwyn Denny who became President of Conference in 1982-3. The Sunday school at Bowthorpe Road was attracting over 200 children during the 1950s.

A building fund made headway over the years until finally, the new church was opened on the 30 March 1974. It, too, was designed by Clifford Dann and proved to be his last commission.

In December 1978 a large banner was presented to the congregation by the Good Shepherd church in Cleveland, Ohio.  It was brought to Bowthorpe Road by a former member of Rosebery Road church who had come from Ohio and was visiting her niece who attended Bowthorpe Road.