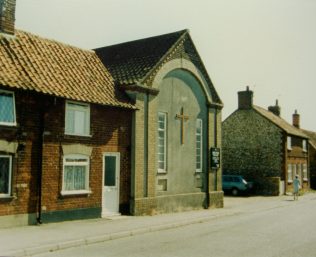 The North Elmham Primitive Methodist chapel in Keith Guyler’s photograph was used from 1876 with alterations in 1958.

Before this chapel was opened, around 1835, a chapel previously used by a Wesleyan Methodists or Congregationalist society was acquired. Mr Guyler uses the word derelict – whether that was before or after Primitive use is uncertain.

The chapel continued to be used until 1997 when the hall was bought and refurbished.  It opened for use in January 2000 as the Eastgate Centre, a meeting place for the Elmham Scouting and Guiding groups, and for other community use within the area to complement the facilities offered by the Institute and Sports pavilion.

On Google Street View in 2011 it still carries its cross which is actually built into the brickwork.