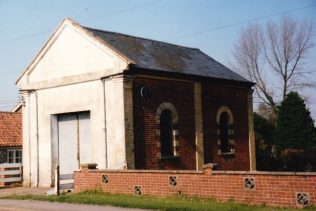 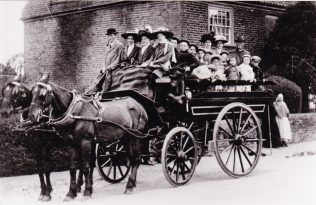 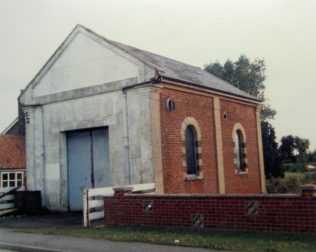 Primitive Methodist activity at Newton St Faith was first seen in a Norwich circuit plan of spring 1827 and when a camp meeting was organised in the village in late spring 1828.  A collection of 12/7d was taken.  The small society numbered three members in 1828 although, as always, more people would have attended its services without being formal members.  Tradition tells that they met in a small cottage.

By March 1831, the number of members had risen to 11 with two people ‘on trial’.  The account book states that in June 1823, the circuit decided that ‘£3 be put into the Circuit Stewards’ hands for the benefit of the preaching place at Faith’s Newton ’1  - all Primitive Methodist documents eschewed the use of ‘Saint’ in the titles of villages!  Two years later membership had risen to 22.

An enigmatic entry in the circuit minute book in September 1842 advises the congregation at Newton St Faith’s chapel ‘to pass over this insult as they were Strangers that committed the outrage in our preaching place.’ 2   Unfortunately no further details are given and no relevant report appeared in the newspapers

From this point circuit references mention a ‘chapel’ in the village rather than ‘preaching place’, but no descriptions of the building remain.

In the summer of the following year the circuit decided to send some Sunday school children to the chapel to recite suitable pieces and sing hymns to attract a large congregation so that a special collection could be made in order to pay the chapel rent.

By 1837 two classes were organised in the society, one of which was held at the chapel and led by a local preacher, the other met at ‘the house of Mr Gladman.’ 3     In March 1844 the circuit determined that a revival should be held in the village.

Interestingly, the society sent no return in the Religious Census of 1851.  However, a form was completed for a Wesleyan chapel in the village, built in 1821, where 80 people attended Sunday morning worship with 20 people present in the afternoon.  There was also a Sunday school of 20 scholars.

In December 1850, the Norwich Wesleyan Reform committee resolved to hold meetings in a number of country places in order to further publicise their cause and their hostility to what they believed to be the arbitrary actions of the Wesleyan Conference.  Newton St Faith was one of the venues chosen and a meeting was held in the Wesleyan chapel on the 17 December ‘notwithstanding exertion by the advocates of Conference Methodism to prevent it.’ 4   Various people gave addresses to a well-filled chapel in spite of dismal weather and at the end of the evening the audience declared itself to be unanimously in favour of reform.  The society transferred its allegiance to the Wesleyan Reformers by summer 1851.

In November 1869 a local preachers’ meeting sent a deputation to the village ‘to promote a more harmonious feeling among the friends there.’ 5  However, in May 1878 the Quarterly meeting agreed to remove Newton St Faith from the plan.  The discussion is not recorded and the reasons not given.

An attempt was made to form a new Wesleyan society in the early twentieth century and a number of members ‘on trial’ was noted in 1907.

In 1872, a new chapel was built for the Primitive Methodist congregation and opened by Robert Key.  It had just over 100 seats and with congregations of 90, it was regularly full during the last quarter of the nineteenth century.  Only £74 had been raised by the time of the opening of the chapel and a heavy debt burdened the society until it was finally cleared in 1893.

The tiny two-bay chapel was built of red brick with white brick pilasters at the corners and white brick outlining the gable roof  line and running along the top of the wall and round the front windows and door.  There was a glass fanlight above the door, a round-headed window was situated on either side of the panelled door, each with a foundation stone below and the inscription ‘Primitive Methodist Church 1872’ was placed high on the facade.  The roof was of slate.

A Sunday school was begun at the same time that the chapel was opened.  Five teachers were recruited and almost immediately 50 children attended the school.

The anniversary service was always held on Whit Sunday and it was the highlight of the chapel’s year.  Held in a nearby field, it would attract people from all from around who would travel by pony and trap and would be entertained by a brass band during the celebrations whilst children recited, sang and acted Bible stories.

The March 1888 Quarterly meeting censured Frederick Frost, an official in the Newton St Faith chapel and a local preacher for patronising a public house.  Then in September it agreed ‘that a deputation wait on Brother Frost and charge him with damaging our cause there by holding services for another community.’ 6   Immediately Frost resigned as a local preacher and although the circuit urged him to continue his membership, by the time of the next Quarterly meeting he had given it up.

In the last part of the nineteenth century, one of the leading chapel members was William Furness, an itinerant farm worker.  He played a prominent part in improving conditions for the agricultural labourer.  A supporter of George Edwards, secretary of the Norfolk and Norwich Amalgamated Labourers’ Union who worked tirelessly to improve the pay and conditions of work for farm labourers, Furness helped organise a harvest strike in 1894 at St Faith’s, but charged, together with others, of riotous assembly, he was committed to prison for two months.  On his release, a brass band and a large number of people marched with him from Norwich prison to Newton St Faith in triumph.  Then when a new union for agricultural workers was set up in 1906, Furness became an official of the St Faith’s branch.  Throughout all this time he was a dedicated member of the chapel.  His daughter, Alice, became chapel steward in his place after his death.

The building was declared dangerous and was closed in June 1960 although services continued for several years in the village hall.  Eventually the society amalgamated with Hainford and then Horsham St Faith.  The chapel is now used as a building store and a large door has been set into the facade destroying many of its original features.