A description of life in "the manse" during the early days of Primitive Methodism. 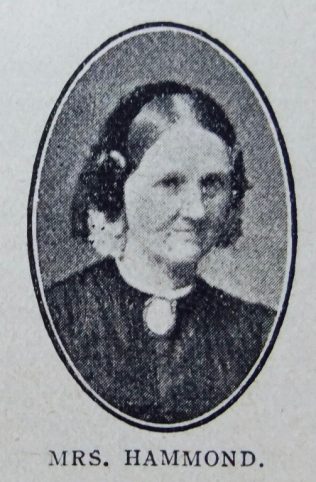 Transcription of ‘Sketch’ entitled “My Mother” In the Christian Messenger in the series “Of Godly Women Not a Few” by W.A. Hammond

East Anglia, like every other part of the Connexion, is not only indebted to godly women who have occupied public positions and rendered public service but to another type whose influence has been great if their names have not been blazoned abroad. It has been greatly indebted to its earnest evangelists, its gifted preacheresses, its hospitable hosts and hostesses, but it has also been indebted to many saintly souls who have served in quiet and secret places and in simple unostentatious ways. Their record is on high, but they must not fail of recognition here.

Such devoted souls have been found in almost every town and village, but nowhere more conspicuously than in the little cottages which have been the “preachers‘ homes ” or the “Circuit manses” in rural England. Strange manses they have been, with little ordinary accommodation and no special provision for a preacher’s need either in quiet study or inner sanctum, vastly different from the stately parsonage that stands in nearly every village beside the church or hall. Colchester, the home of many a godly family, standing in the chapel yard, with rooms like rabbit hutches, looking straight on to the chapel front; Stowmarket, at the end of the barn-like chapel, cut off from the chapel when early expectations were not realised and converted, not into a schoolroom which was greatly needed, but into a minister’s house, cramped and awkward, but precious with many sacred associations; Rockland, a dual cottage, where tall men like William Antliff and Robert Church found it difficult to stand erect, but the “little home” of mighty men; or Fakenham, down the old Hayes Lane, where the two married ministers lived near each other for “consultative purposes.”

Little homes, but how delightful they were, and their delight sprang not from costly furniture or elaborate accommodation, but from the lady of the house who made the cottage radiant with her presence. For those were the days of Circuit preachers, when the Circuit round lasted a full week and sometimes more. The husband would leave home on Sunday morning and work his way round from village to village during the week or fortnight, leaving his home entirely dependent upon the care and thrift and management of the saintly woman there.

Of these godly women East Anglia has had its share: Mrs. E. Blake, Mrs. R. Eaglen, Mrs. W. Yeadon, Mrs. M. Warnes, my mother. What godly Women they were. They were not gifted preachers, but they were saintly souls. They did not live in the limelight, but they made those little homes sweet and precious. They were not stately dames, but they were worthy helpmeets to their husbands in holy toil. They did not fight with polished weapons in the sacred desks, but they builded better than they knew the solid fabric of domestic life that enriched many beside their own families. One wonders in these days how they managed to keep the home fires burning at all. With scanty incomes, and sometimes large families and pressing outside claims, we wonder how they lived, but they did. When salaries were raised from seventeen to nineteen shillings per week, and the Circuit officials of a noted and powerful Circuit thought the end of the Connexion had come, the stately minister, for such he was, said, “Don’t be alarmed, brethren, they will be raised to a pound before long.” What! a pound. But he only added fuel to the fire. A pound, but not always that. In looking over my father’s Circuit book I find the record of one Circuit, then reputed to be the wealthiest Circuit in the district, which, when it had paid the last quarter’s arrears to its three preachers, had nothing left, and they all went home without a penny for that quarter’s salary, nor did they ever get it. Good old times, but capable of improvement.

And yet they managed to live. They paid their way, lived decently, dressed respectably, educated their children fairly, and were passing rich on £50 per year. How was it done? God only knows, but done it was, and the credit must be given to those superb chancellors at home who wrought and planned and schemed and somehow managed to provide things honest in the sight of all men on very little cash.

My mother was one of the group. She was a saintly soul—quiet, retiring, lovable. She came from a comfortable home into the struggles of a travelling preacher’s life. Her father was the Circuit steward of Norwich Circuit in those strenuous days, and my father, the probationer on the Circuit, proudly marched off with the Circuit steward’s daughter to the Continental Station of North Walsham. The home was small and bare, but my mother determined to make the best of what she had. It was no use repining in those days, or like Oliver Twist, demanding more. The more would not come, but she made the little cottage HOME by her gracious presence. ‘

She was a gentle spirit. She had “the apparel of a meek and quiet spirit which is in the sight of God of great price.” I never knew her speak an angry word, not occasion a moment’s strife by any hasty action. She exercised great power by her gentle meekness. She never pined for what she could not have, nor murmured because of the difficulties associated with the work. Hers was a cheerful soul, a delightful spirit. No shadow of anxiety ever crossed my father’s path as he plodded on from day to day away from home. He knew the home was all right, and when the time for his return came the welcome was such as would cheer the soul of any depressed man and inspire him with new courage, faith and hope. Ah! those Friday nights. The little tit-bit toasted in the Dutch oven, that none of us could share, and which none wished to share, but which meant “welcome home” to the weary worker.

One thing she never did. Debt was a terrible abhorence to her. What she could not pay for she would not have. How she managed to provide the table I don’t know. It was never bare. How she managed to clothe us boys I cannot imagine. But clothe us well she did. Truly, HOME it was, plain, spare, thrifty, but splendidly bright and happy, full of sunshine and joy. Those Sunday nights can never be forgotten, when the public services were over, and the family song commenced. “Heaven was touching earth with rest.”

She never paraded her religion, and yet we all know how deep it was. The family alter was never neglected. If the father was priest in the family the duties of the office mostly fell upon the priestess, for morning and evening prayers were never neglected, whether father was at home or not. Rarely did she lead in the public service, but when she did, how quietly powerful was her pleading with God. It was in the weekly class-meeting that her gifts found their best expression. There she would tell in choice but simple language of the hidden depths of her religious experience, and cheer many a fainting soul by the completeness of her trust in Christ. She was indeed a succourer of many. In the home of sickness her quiet ministry found its finest opportunity, and she wrought effectively for God in such daily ministrations. She was a Mother in Israel, sane, shrewd, ready to comfort and ever ready to help. Her advice was always sought by those in trouble or sorrow. Young men and maidens came to her for counsel and advice, and invariably confided in her. She carried the secrets of many a youthful heart, and quickly divined the restlessness of many a soul. Like so many quiet souls she was a tower of strength in the time of need. She was not the superintendent of the Circuit, but her counsel carried weight, and when the “super” was away little was done without her advice and counsel.

She was but the type of many a preacher‘s wife who made Primitive Methodism possible in rural England. Quiet, unassuming, strong, she held the base securely whilst aggressive work was carried on afar. She kept the haven restful and quiet so that the mariner could find refreshment and shelter from the storms that blew, and go forth again with renewed strength because of the rest of home. She fulfilled St. Paul’s ideal of lofty womanhood, “discreet, chaste, keepers at home, obedient, a pattern of good works, an example unto many,” and so helped to build up the church of her choice in the Eastern Counties. Her name lingers in the memory of many, not because of great public service, but because of quiet ministries.

Such workers must not be forgotten. Their names are precious and their works follow them. East Anglia treasures the memory of great workers in public spheres, but she reveres the names of many who have been knights of the parsonage, and have made wide-reaching service possible by their chivalry and devotion. Of such is the kingdom of heaven.

For information about her family follow the link to Rev. William Hammond.