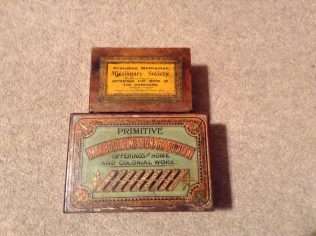 The Primitive Methodist Circuits and chapels were often financially challenged, not only by the burden of chapel debt, but also by the need to raise money to fund mission. Hence missionary collection boxes, as with other Methodist denominations became a financial expression of missionary zeal.

The Primitive Methodist Magazines give so many examples of how such collecting was recognised. in 1858 the Burland circuit wished to record, and have published the collecting efforts of its members, including “Mr Taylor’s box £5-2s-81/2d, Mrs Ridgway’s ditto £1-8s, –Mrs Weaver’s box £2- 3s-4d.”

Such collecting reflected personal commitment over the year to accumulate a significant sum in a small wooden box. This practice has continued to the present.

Later in the century the differing causes were reflected by different boxes, Christian Endeavour, or Colonial work. Originally however in the urge to mission the whole country the boxes were for the ‘homeland, ‘ as illustrated in the photograph with the smaller box.