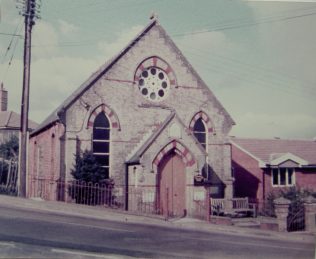 Carisbrooke Jubilee Primitive Methodist chapel was opened in 1883. The 1883 Primitive Methodist magazine contains an account of the laying of the foundation stones for the new  chapel. It was intended to meet the needs of the societies at Carisbrooke and Gunville. The cost was estimated at £520 and they expected to raise half by the end of the opening services. In a later edition there’s a report confirming the chapel had opened with a cost of £540.

At the time of Keith Guyler’s picture in 1984 it appears still to be in use with a Methodist church notice, although it is a little run down.  On Google Street View in October 2011 it is in use as a house.