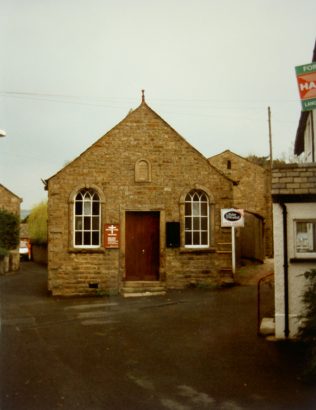 The former Primitive Methodist Chapel which was typical of mid-19th century non-conformist places of worship was  opened in 1861.  Located on chapel Square, it has been converted into a house.

The opening is described by Thomas Bennett.

“At Brookhouse, Lancaster Mission, we have recently built a connexional chapel. The foundation-stone was laid on Good Friday, 1861, by the writer, and the opening services took place on Sunday, July 7th and 14th, 1861 ; the Rev.G. Stansfield preached on the former day, and the Rev. A.M’Kechnie, on the latter. All the services were of an interesting character and the chapel was filled on both Sundays. It is a neat and substantial building in a good situation, about the centre of the village.

The walls are built of good stone, and it is covered with the best blue slates. It is well lighted, with seven windows, and properly ventilated, and fitted up with pews and rail-back seats ; across the bottom end is an elevated platform with neat railing, the pulpit being in the centre. The size of this sanctuary is 10 yards by 7, from 13 to 14 feet from the floor to the ceiling. In the front is a very neat inscription stone. The total cost of the chapel, including purchase of the site (which is freehold), and enrolment of the deed, &c, is about £100, towards which we have raised nearly £50. We have borrowed £50 on a promissory note, at 4 per cent. We are grateful to T. Johnson, Esq., for his engrossing the deed free of expense, and to all who have assisted us in this undertaking we are thankful. May the Lord make this sanctuary a great blessing to the place, and in it may many souls be saved. Amen.