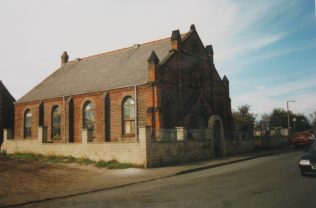 Hodthorpe Primitive Methodist chapel was opened in 1904 and sold for £400 on Wednesday, 10th September, 1952.  At the time of Keith Guyler’s photograph it  was in commercial use but was semi-derelict.

On Google Street View in 2011 it has been converted into a house.

Whitwell Local History Group website gives further information about the history of the chapel, some of the people involved and the uses the building has been put to, including a soup kitchen, coroner’s court and food factory.  It also refers to a  preceding tin chapel in which the old witness box from the superseded Worksop Police Court found a new use.