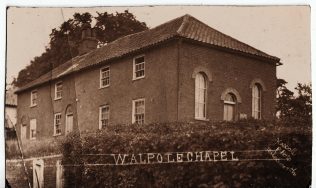 zoom
The note in the bottom right hand corner refers to “Hassall photo Halesworth”. Halesworth is the next village to the NE from Walpole. The building is still visible on google streetview and seems to have been converted into 2 houses.
Martin Lazell

There is an account by William Crown in the 1860 Primitive Methodist Magazine about the opening of Walpole Primitive Methodist chapel. It says that the society had met in a cottage for a number of years but built a chapel that would seat 130 at a cost of £130 with £52 raised. Opening celebrations included tea for 150.

A Primitive Methodist chapel is marked on the 1884 1:2,500 Ordnance Survey map up a footpath to the south of Church Hill. On the 1904 map it is marked a little further west, although in both cases the exact building is not clear. On the 1957 map it is marked (back closer to the original location) as a disused chapel.