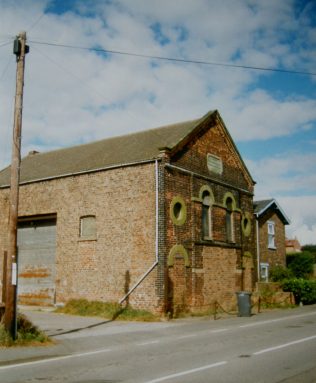 Cliffe Primitive Methodist chapel was opened in 1842 and was rebuilt in 1864.

By 1947 it had been sold, and at the time of Keith Guyler’s photograph in 2002 it was in use as a store.  On Google Street View in August 2011 it is again for sale, although by then it appears to have been converted for residential use.

The Primitive Methodist magazine contains an account of the foundation stone laying and opening of the chapel .  In the magazine article Cliffe is spelled without the final “e”.

“Opening of a New Chapel and Schoolroom at Cliff, Selby Circuit.—Upwards of twenty-two years ago a Primitive Methodist chapel was built at Cliff. This having become too small, and a schoolroom being greatly needed, we determined to take it down and erect a new one.

On March 4th last, the foundation-stone was laid, in the presence of a large assembly, by W. Briggs, Esq., of Leeds, to whom, in the name of the trustees, a beautiful silver trowel and mahogany mallet were presented by the writer ; while he in return presented the trustees with a donation of £\5. After the ceremony appropriate addresses were delivered. The writer delivered a lecture in the evening to a crowded audience.

The chapel is chaste and beautiful ; instead of a pulpit, we have a semicircular platform, 10 feet long and 5 feet from back to front. Across one end there is a gallery, with six rows of pews, and under the gallery a commodious school-room, with slides so as to throw it and the chapel into one. The chapel contains 200 sittings, 46 of them free, and the school-room provides accommodation for 70 more.

The opening services commenced on the 1st of June, when a sermon was preached by the writer. On Sunday, June 5th, Councillor Dowsing preached morning and evening, and the writer in the afternoon. On Thursday, June 9th, preparations were made for a great day. At ten o’clock a bazaar was opened in a large marquee, capable of containing 1,000 persons. At two o’clock a sermon was preached in the chapel by the Rev. H. Simon (Independent). At four o’clock a social tea was provided, when upwards of 400 persons partook of the refreshing beverage.

At seven o’clock a public meeting was held, and addresses were delivered by the chairman, Mr. Dodgson (of Leeds), and others. The afternoon proved to be a fearfully wet one, which very materially interfered with the interests of the bazaar and tea. However, the proceeds were as follow :—

On Sunday, June 12th, H. J. McCulloch, Esq., preached morning and evening (kindly leaving behind him a donation of £2), and Mr. Summerscales, of Leeds, in the afternoon. On Wednesday, June 15, Rev. T. Griffiths (Wesleyan) preached. On Sunday, June 19th, W. Briggs, Esq., preached morning and evening, and the Rev. R. Harrison in the afternoon. All the services were of a deeply interesting character, and were accompanied by Di vine unction.

The total cost of the chapel is about £285 Towards which we have raised by donations, collections, bazaar, tea, &e. . . £170 Debt transferred from the old chapel …. £95 To all our friends who have so kindly aided us we tender our warmest thanks, praying that heaven’s choicest blessings may rest upon them. T. Greenbury