Our Centenary - Lorenzo and Peggy Dow 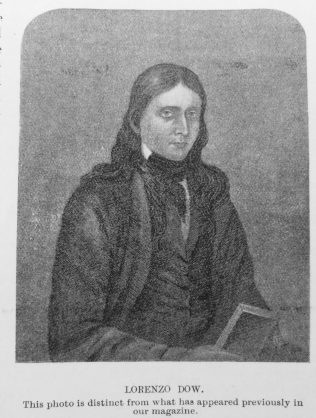 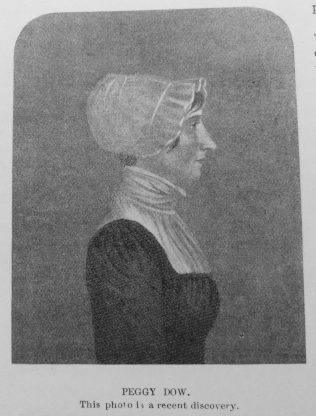 Transcription of article published in the Primitive Methodist Magazine by Rev. Albert A. Birchenough

ON Christmas Eve, 1805, the eccentric American Evangelist, Lorenzo Dow, along with his brave wife Peggy, first set foot on English shores. They had sailed from New York on November 10th. She was the only lady on board the “Centurion,” and for forty-seven days she never saw the face of a woman. Friendless and almost penniless the God-fearing couple landed in Liverpool. When their limited exchequer was exhausted, they were turned into the street by the wife of a boarding-house keeper. For a few days they found a temporary home with Henrv Forshaw, who was a printer by profession – and a godly Methodist in religious belief.

Lorenzo Dow’s first English service was held in a cottage in Edmond Street, at which some twenty people were present. One eventful night, while Dow was preaching in the Liverpool New Connexion Chapel, Peter Phillips, the honoured founder of the Quaker Methodists, was providentially led thither. A lasting friendship was formed, and Mr. Phillips’ hospitable residence at Warrington was the home of Lorenzo and Peggy Dow during their evangelistic mission in England. In this quiet retreat, Dow wrote several of his books. Here his wife, after the birth of her first child, lay dangerously ill of a fever.

By birth Dow was an American, but his parents were of English extraction. He was born October 16th, 1777, in Coventry, in the State of Connecticut. At the early age of fifteen he was soundly converted. By earnest study and persevering prayer he prepared himself for his future ministerial usefulness. When he was only eighteen years of age he was permitted to fulfil some preaching appointments for several of the American Methodist ministers. They, however, were not favourably impressed with his eccentric efforts, and  consequently at the Conference of 1797, he was not received as a Ministerial Probationer. Notwithstanding the Conference prohibition he was impelled by a strange zeal for perishing humanity. He visited the distant outlands and settlements in the “wilderness” of America, where no Methodist Backwoods’ preacher had previously penetrated. During his self-imposed eight months’ tour in the solitudes of the States he travelled, chiefly on horseback, nearly ten thousand miles, and preached from ten to fifteen sermons per week.

At the following Conference, after a lengthy debate of three hours’ duration, respecting his suitability to itinerate, it was decided that he should be employed by the presiding elder. He received a chain of appointments, and began his ministry by visiting from house to house, and preaching to the widely-scattered settlers as opportunity presented. On account of his eccentricities of manner, oddities of speech, and peculiarities of attire, he became generally known as “Crazy Dow.” His mission was pre-eminently successful. During the year, through his evangelistic labours six hundred persons were converted, and were admitted into the fellowship of the Methodist Church. At the Conference of 1799, notwithstanding his remarkable success he was penalised by being sent to Essex to form churches. Dow has the honour of being the pioneer missionary in Lower Canada. His stirring sensational evangelism resulted in the formation of a new circuit which at the ensuing Conference reported 274 members.

Neither the Annual Conference, nor any Methodist Bishop could control the activities of Lorenzo Dow. He was an exception to all ecclesiastical procedure. He has been described as “The Meteoric Lorenzo,” “The Shooting Star,” and “The Comet of the Religious Firmament.” Rev. H.B. Kendall, B.A., declared him to be “one of the strangest earthen vessels that ever God condescended to use and honour.”

In early manhood his appearance was as strange as his manner. He was a striking personality. Pale and sallow in complexion, he had allowed his hair to grow until it reached his waist. His eyes were of unnatural brightness and shone like diamonds. In 1801, he determined to visit Ireland where he fully believed the Lord had a spiritual work for him to do. Acting upon a strange impulse he deserted his circuit in Vermont, and in gloomy November he landed at Larne in the North of the Emerald Isle. He was only twenty-two years of age and was in feeble health. His mission was a great success. The Irish churches were quickened and scores of people professed conversion, During his visit he was  subjected to a variety of hostile experiences. He was maligned, persecuted, stoned and imprisoned. For several weeks he was seriously ill with smallpox and was carefully tended at the Quaker home of Dr. Paul Johnson, of Dublin.

During the autumn of 1805, Dow again felt that he must visit Europe. He wanted to recruit his physical strength, and also to renew his friendship with god’y Dr. Johnson.

His second visit was principally centred on the towns and villages of South Lancashire, and the Vale Royal of Cheshire. On these preaching excursions he was generally accompanied by Dr. Johnson or Peter Phillips. Occasionally he preached during a Sabbath seven open-air sermons, each an hour in length, and at the close of the day, felt all the better for the strain upon mind and body. At Knutsford, Eleazar Harthern, “the wooden-legged preacher,” was converted. Subsequently, he became one of the Pioneers of Early Primitive Methodism.

At Macclesfield he preached to an out-door congregation of five thousand people; and in Congleton he addressed eight thousand persons. Thomas Cotton and Daniel Shubotham heard Lorenzo Dow preach at Congleton and at Macclesfield. Hugh Bourne, however, was not favourably impressed with the doings and sayings of the “American” until one Sabbath when “a messenger came over to Bemersley to say that at eleven o’clock that forenoon he would preach in Harriseahead Chapel.” Both Hugh and James Bourne attended the service “and were edified with his preaching.”

Dow’s earnest “talks” about camp meetings interested Hugh Bourne, and dispelled his prejudices. On that same Sabbath, Dow occupied the pulpits of the Methodist chapels at Burslem and Tunstall. On the following Monday morning at the early hour of five o’clock and again at nine, Dow preached his “farewell”? sermons at Congleton. Hugh Bourne attended both services in the Cheshire town. He also purchased Dow’s Journals and Tractates on the holding and conducting of camp meetings in America.

Lorenzo Dow may be rightfully regarded as “the John the Baptist” of the Primitive Methodist Church.

“If there had been no Dow,
There would have been no Mow.”

Through his fervent ministry some ,thousands of people were converted in the county of Chester. These spiritual sons and daughters of the noted “American” formed the rank and file of the first English Camp Meeting on Mow that resulted in the birth of our own Church.