Our Centenary - Stories of Persecution - The Hampshire Mission 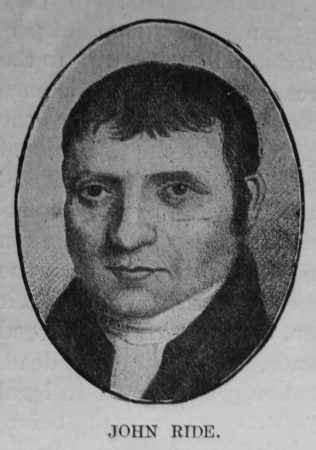 Transcription of article published in the Primitive Methodist Magazine by Rev E. Lucas

IN the prosecution of their mission the pioneers of Primitive Methodism were in many instances called upon to face bitter opposition. Poverty and severe toil were their normal experience. In addition to these they ranged the gamut of persecution from petty social malignities to the verge of actual martyrdom. Mob violence was to be expected in proportion to the ignorance and degradation of the people, and these were darkest where the dominance of the clergy and the squirearchy was completest. Clergymen and magistrates were often instigators of the worst brutalities of the mob. Earnest men seeking to save their fellows were beaten, trampled upon, dragged through horseponds, and left for dead. Sometimes persecution was clothed in legal forms and they were summoned before magistrates and haled to prison. In no English county was this opposition more persistent and malignant than in Hampshire. John Ride reports in September, 1833: “In the County of Hants we have mighty opposition, and the missioners are exposed to much suffering.”

Mr. G. Wallis was appointed to open this mission in March, 1833. On Sunday, May 5th, he preached at Andover, to a large crowd, and notes the presence of a number of men drinking and swearing, one of whom “rushed through the congregation with a stick, swearing he would knock me down if I did not desist; but he was prevented.”

The following Sunday he was at Andover again. “I began to sing and pray, and while thus engaged, a gang of rebels rushed in and knocked me down. I rose, and several times attempted to preach, but in vain; what with the throwing of dirt, rotten eggs, etc., and the noise and rush of the mob, it was wholly impossible. Some cried, ‘They shall not come here!’ Others cried, ‘Kill him! kill him!’ But  i escaped without serious injury.”

Undeterred he visited Andover a third. time, on the 19th of May, accompanied by Mr. W. Wiltshire, and many members from neighbouring villages. He says, “We were soon surrounded by five or six hundred people. . . . I began to preach, and the beadle of the town came and seized me by the collar, and pulled me down from my standing, while the ungodly with one accord cried, ‘Away with them – throw them into the river.’ We were then dragged down the street, surrounded by a violent outrageous mob, some crying one thing, some another, pushing us about in every form and striking us with besoms and sticks. We then requested the beadle and constable to take us into some house in custody, or to the gaol if we had done anything to deserve it. But all to no purpose; they hurried us along the streets, and tore the skirts off both our coats.”

The preachers, having escaped to a friend’s house, the fury of the mob was vented on their followers. “They followed them out of the town, fell on them, male and female, and dreadfully assaulted them, beating them and tearing their clothes. They followed some of them two or three miles, and used them shamefully and disgracefully.”

At Stockbridge the constable forbade his preaching, and threatened to put him in gaol. At Old Basing he was thrice knocked down and trampled under foot, until his persecutors left him, thinking that life was extinct. On another occasion he was drenched with bullock’s blood.

In September he was joined by William Fowler, a young man who had only been a few months engaged in the work, but full of zeal and filled with the martyr’s spirit. He preached at Stockbridge on October 6th. He was met by an order from the bailiff to leave the town, but refused to do so, and took his stand under the market house, with the intention of preaching. He was soon surrounded by a band of drunken persecutors who covered him from head to foot with rotten eggs. The constable who was present gave them encouragement. “Immediately they got a long rope to run round and wind us up together, either for the purpose of getting us into the water, or to have the more advantage of us. But some got their knives and cut it in four or five pieces, and so got liberated.”

The following Sunday he was again appointed to preach at Stockbridge. His friends persuaded him not to go. No one dared to accompany him. “But my Master said, ‘Go, fear not them that can kill the body only, and after that can do no more.’ I believed He would be with me, and therefore went with good courage.” He walked right through the town, conversing with all whom he met, and, by his tactful proceedings, created a diversion in his favour and finally secured a hearing. He escaped on this occasion with nothing worse than a shower of flint stones.

At Alresford, certain inhabitants prepared for the coming of Mr. Watts six dozen rotten eggs, a barrel of coal tar, and two bundles of rods.

“On his approaching the place where he intended to preach, they hailed him with shouts of rage and madness. He called at a friend’s house, which was instantly beset by the mob, and to escape their violence he was obliged to conceal himself; they broke the windows, and covered one of the room floors with eggs.”

At another village the clergyman went round and ordered the parishioners to go into their houses and shut the doors and windows if Mr. Watts preached.

There were often, however, those who sympathised with the preacher, and sought to protect him from the violence of the mob. At Whitchurch, a servant from the “White Hart” Inn, who interfered with a service conducted by Mr. Fowler, “soon had a vast number round him, who thrashed him and sent him off, while another part  surrounded and protected me. I preached with great liberty and I believe lasting good was done.”

In many villages the preachers were gladly welcomed, their work was accompanied by numerous conversions and the formation of flourishing societies.

It was in Hampshire that the missionary meeting was held at Mitcheldever, in 1834, which resulted in John Ride and Edward Bishop being charged “with leading and heading a riotous mob, with being armed with bludgeons, and by force and arms, putting his Majesty’s faithful servants in fear, obstructing the thoroughfare, and being a nuisance.” They were cited before the magistrates at Winchester. No case being proved against them, they were offered freedom if they would promise not to preach again at Mitcheldever. They refused, and for a fortnight were kept in the county gaol, and were bound over to be tried at the Quarter Sessions.

The results of this toil and these persecutions bravely borne may be summed up in the words of Mr. Bishop speaking in 1853, twenty years after:

“There are villages where we found in 1832 only one religious service on the Sabbath day, no week evening lecture, and no Sabbath School, in which there may now be found four or more religious services on the Sabbath, two or more on week evenings, and two Sabbath Schools; and he must be under the influence of strong prejudice, who will not admit that the labours and sufferings of Primitive Methodist preachers have, under God, had much to do in producing this happily altered state of things.”