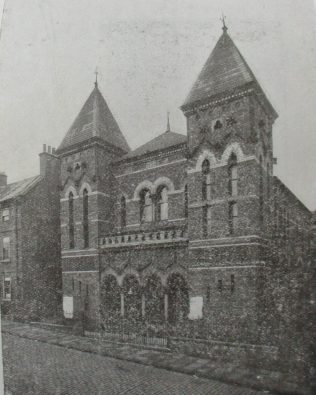 The Primitive Methodists in Stockton held their first camp meeting in 1821 and had a room in Playhouse Yard; they opened a chapel in Maritime Street in 1825.  By the end of the nineteenth century there were three chapels -Paradise Row, 1866, Norton Road, 1876, and Bowesfield Lane, 1887 – together with some mission rooms.

The foundation stone for Paradise Row Primitive Methodist chapel, Church Road, was laid in June 1865 by Errington Ridley and the chapel was officially opened on 20th May, 1866. Speakers at the opening events included T Southron, T Smith , T Greenfield, E Hall, W Clemitson, J Welford, FB Boynton, J Yarwood, G&C Hudson, J Appleton, JA Bastow, R Fewnwick and J Spence. The chapel was large with the worship area measuring 62.5′ x 44′.  It seated 620 people and cost over £3,000. The names of some of the donors are listed by Thomas Southron and John Welford in the Primitive Methodist magazine account of the opening.

The chapel brought immediate success.  Sunday school attendance increased and membership rose to 137. Itwas used by Moody and Sankey during their visit to Stockton in 1893.